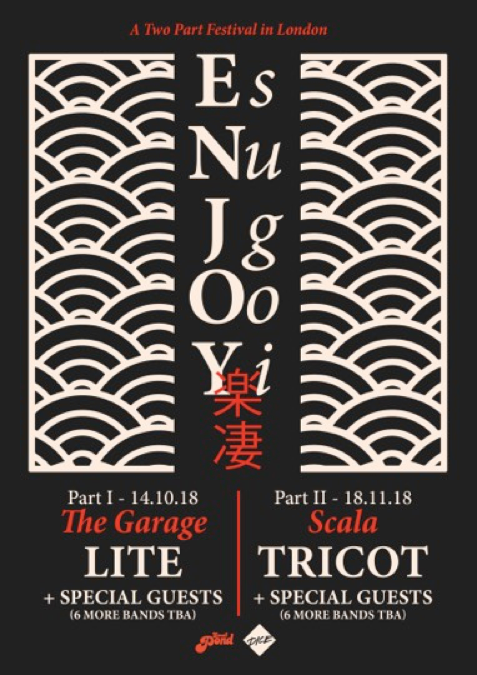 A Two-Part Festival in London

Small Pond are excited to present ENJOYsugoi, a two-part London festival spotlighting some of their favourite artists from Japan, alongside a packed line-up of great acts from all corners of the alternative/experimental music world.

Taking over two of the capital’s iconic venues on separate days, headlined by LITE and TRICOT respectively, the festival marks the biggest headline shows yet for these cult heroes, following previous sellout London dates in which they have each cemented an ardent fanbase.

Limited early-bird tickets for both days are on sale from Friday 25th May, via DICE:

ENJOYsugoi is the first major London event for the promotions arm of Brighton-based Small Pond following the recent hugely successful third instalment of their Bad Pond Festival in their hometown (which adds to their frequent live promotions in the city, ranging from rising indie sensation Boy Pablo to modern piano legend Olafur Arnalds).

Although there are six more acts still to be announced for each day, the initial headliner announcements are sure to cause a stir.

LITE are a Japanese instrumental rock band known for thrilling and emotional compositions, progressive, edgy riffs and complex rhythms. Widely regarded for their explosive live show and tireless touring in the US, Europe and Asia, they are one of the most exciting bands to emerge from Japan in the last decade. In their live show they draw on a mighty back catalogue spanning 14 years.

Formed in Kyoto, TRICOT have been bubbling since the mid-2000s; their unusual and distinctive sound brings a mixture of pop harmonisation, emotive vocals and complex rhythms. With fans all around the world, they have toured extensively in Asia, North America and Europe (including UK tour support dates for Pixies).

ENJOYsugoi is another ambitious project from Small Pond, a young music company centred on a busy recording and rehearsal studio complex in the heart of Brighton, which is becoming a favourite haunt for rising bands and renowned acts alike – many of whom have also stopped by to film intimate live session videos or deliver masterclasses. Artists to have passed through include Warpaint, The Noisettes, Tyondai Braxton (Battles), Nick Reinhart (Tera Melos/Death Grips) and Ben Weinman (The Dillinger Escape Plan). Turning a hand to all aspects of the modern independent music industry, the company also offers live filming and photography, and touring services, as well as a rapidly expanding record label which is home to attention-grabbing and adventurous acts including The Physics House Band (a recent Guardian New Band Of The Week), Natalie Evans, Inwards, Brian Campeau, InTechnicolour, Wild Cat Strike and Luo.