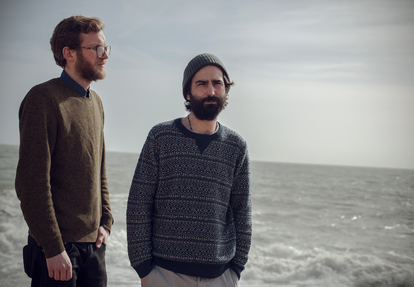 Foreign Poetry
Brand new single ‘MHL’
Label: Pataca Discos
Release Date: 25th May 2018
Austrian/English songwriting duo Foreign Poetry are releasing their brand new single ‘MHL’ on May 25th via Portuguese independent label Pataca Discos. Multi-instrumentalists Moritz Kerschbaumer and Danny Geffin have an already rich history playing in various bands and producing within the same environment but their newest project marks the first time they’ve collaborated so closely.
After meeting while Moritz was playing with Benjamin and Danny as part of The Geffin Brothers, the two have worked on and off alongside each other since 2011, what followed was an overseas partnership involving back-and-fourth ideas and recordings over the course of 12 months as well as a few studio days in which they could play together practically. The writing style resulted in a series of tracks with layers of exceptional musicianship and texture, with the unique outcome of a two-piece with the backing of a full band at their arsenal. The recording was completed with sessions at Pataca Studios in Lisbon, adding embellishments and extra percussion with Anna Louisa Etherington (violin), Alice Febles Padron (backing vocals), Luís Walter Benjamin Nunes (drums and backing vocals) and Tony Love (drums).
‘Grace and Error on the Edge of Now’ works as something of a concept album tackling a variety of larger abstract notions as well as politics, the environment and the intricacies of life and human relationships. Danny tells us; “I think the album is a sincere attempt both as a reminder of something human and humble, which may have been forgotten, and a growing concern for the continual lack of purpose and connection evident in widening globalized chaos… it’s the best time to be alive but why doesn’t it feel that way?”
New single ‘MHL’ showcases a more upbeat danceability from the eclectic twosome, reminiscent of the likes of The National, Alt-J and Future Islands. Its up-tempo beat is an almost direct contrast to the melancholic atmosphere the band so elegantly create. Its meaning is divided into two themes. The first, a nostalgic look back at friendships lost and the bittersweet memory of simpler times. And the second, a harsh observation on our view of relationships now, obscured by social media platforms and accelerated connectivity. “Within these parameters, governed by the internet chain, everyone is looking for the right answers to the wrong questions, everyone wants to know things, rather than feel what they know to be right” Danny explains.
Elsewhere on the album Foreign Poetry reach epic heights through enormous soundscapes and complex orchestrations, as well as more laidback grooves which strip some of the instrumentation away in favour of barebones lyrical storytelling. In each corner of the record there’s a nuance to be discovered in which the band construct a world entirely possible to lose yourself in.
They will be performing at the prestigious NOS Primavera Sound festival in Portugal alongside the likes of Nick Cave and the Bad Seeds, The War On Drugs, Father John Misty, Mogwai and Idles.
Live dates:
May 30th – Two Tribes Brewery, London (single launch)
June 7th – NOS Primavera Sound, Portugal
Album credits:
Produced and recorded by Foreign Poetry at Elephant Ear, London and Studio 15A, Lisbon.
Mixed by Luis ‘Benjamim’ Nunes and Moritz Kerschbaumer.
Mastered by Tiago de Sousa.
All songs written and arranged by Foreign Poetry.
Design & Art Direction by The Designers Republic™
Follow Foreign Poetry:
Website