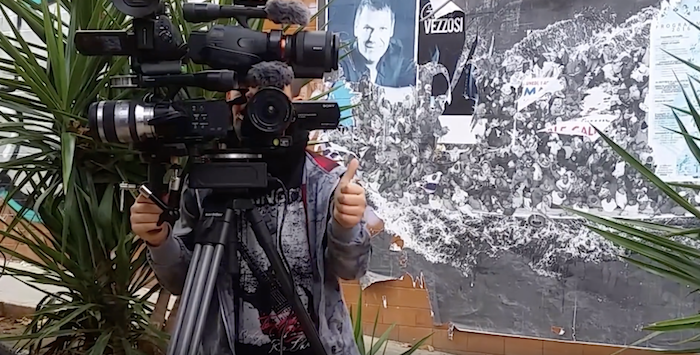 Leading up to a series of live dates throughout France, Magic RPM is excited to premiere a new video for Eric Chenaux’s song “An Abandoned Rose.” Filmed by longtime collaborator Eric Cazdyn at the Ballaro Street Market, a centre of migrant and refugee activism in Palermo, Italy, it relies on Cazdyn’s innovative techniques – including a homemade multi-camera, rotating rig that he calls The Blindspot Machine – to capture the minute interactions of everyday life in a slow and detailed pan that’s been spliced with momentary bursts of colour and glimpses into one particular migrant narrative. It’s a perfect visual counterpart to “An Abandoned Rose,” with its deliberate pacing that matches the tangled guitar and crooning vocals while highlighting the understated compositional beauty that Eric Chenaux has become renowned for.

Drawing from Eric Chenaux’s rich history in avant-folk, post-jazz, improvisation and balladry, Slowly Paradise is a lovely collection of mostly long songs guided by soothing, buttery singing and bent, fried fretwork. Chenaux grapples with the relationship between improvisation and structure in unique, idiosyncratic ways, and the resulting juxtaposition of his mellow, dexterous crooning and his highly experimental (and equally dexterous) guitar explorations, explodes even unconventional notions of singing and accompaniment, of tonal and timbral interplay between guitar and voice. This stunning new record, showcasing Chenaux’s singular voice and guitar stylings, is being celebrated as the most assured and essential solo work from this inimitable, consummate songwriter.

Eric Chenaux’s bandcamp page now includes digital & physical copies of his entire Constellation discography. This marks the first time his back catalog has been widely available on the digital platform: https://ericchenaux.bandcamp.com/

“This is a remarkable record – it is wildly experimental and as comforting as a soft embrace. The way he takes from the singer-songwriter tradition and from the avant-garde somehow enables him to avoid the pitfalls of both, leaving him free to sculpt his own deeply idiosyncratic vision for songwriting. The most interesting art almost always has a sense of duality, and Slowly Paradise is no different; where it radically differs is in the lack of combat between those opposing forces. Chenaux’s love for Sade, for example, in no way contradicts or confuses his love for Derek Bailey. This all-encompassing spirit coalesces on closing track and highlight ‘Wild Moon’, where Chenaux’s voice is at its most rapturous, over Driver’s restrained but romantic Hammond organ lines, all interwoven with some of the most perplexing guitar workouts on the record. This album is truly his strongest yet, and this closing song is his zenith.” – THE QUIETUS

“This voice is perhaps the funnel for this unfurling of thought, where the splay of feeling is consolidated into phrases. His tone is soft, verging on a whisper, as though straddling the boundary between inner thoughts and outward articulation. Sometimes it falls silent, allowing stuttering stylophones or trembling guitars to carry the monologue forth, alternating between the poetry of language and that which spirals away from what the voice can express. I imagine Chenaux to be daydreaming in these moments, as these instrument solos – sometimes chiming like bells, sometimes melting like wax – paint pictures in the air, trying to enact the images that stream through the mind, vivid and beautiful, yet also fluid and unexplainable.” – ATTN:MAGAZINE

“His sixth for Constellation favours longform songs that highlight both his sweet, unfussy pop voice and its unique relationship to his experimental guitar work, with avant electronics and billowing open spaces…The 11-minute, Robert Wyatt-ish “Wild Moon” – with its woozy keys and extreme fretwork building to a quivering peak – stands out, but sensual beauty abounds.” – UNCUT