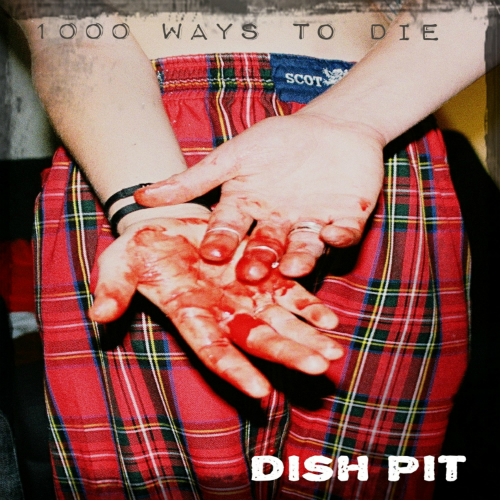 Montreal punk rock trio DISH PIT have revealed a new single ‘1000 Ways To Die’ ahead of their UK tour dates this month. “This track is meant to be an exploration into why everyone my age is seemingly depressed,” says vocalist Nora. “’Is it the hormones in our milk or video games?’ is implying that it could be a chemical or lifestyle thing but there’s also supposed to be an element of knowing that depression is an over-glorified element of my generation’s existence.”

If you don’t speak French in Montreal, it’s the dish pit for you. You clean dishes, glasses, pots and pans, you slave and sweat over the steam of the dish washer in the dish pit. It’s a greasy, grimy, slime-infested, gives-you-zits kind of a place. If you work here you’re put at the bottom of the employment chain and you undoubtedly will get ragged on. Having met in said dish pit, Nora, Jack and Brianna came together as a band under the Dish Pit moniker and moved into an apartment together in Montreal. Wedged between a porn studio and a music studio, these humble beginnings were the very start of Dish Pit’s journey. This was to be Brianna’s first foray into playing bass. Fortunately she’s a fast learner. And also a classically-trained ballet dancer, leading her to create improvised performance art pieces, dancing whilst Jack soundtracks the movements with electronics.

Before they can even really get going, Jack has to head back to his native UK and Nora moves to Mexico City for a year, painting murals. When Nora reconvenes with Brianna a year later they decide they need to go to England, find Jack and get the band back together for a tour.