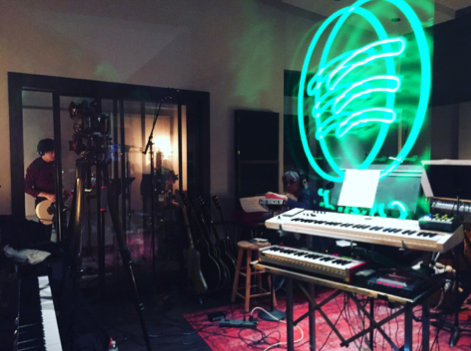 “…truly visual music, and a rare case in which one enhances the other…” – NPR

“Mellow Waves hits you not just with ravishing sonics, but with a plangent heart, a sense of emotional growth that fulfils the promise Cornelius’s music has always had. It brings to a glorious completion a pure emotional core that jangles and compromises Oyamada’s supra-awareness in delicious ways.” – The Wire

“Many of the details [of Mellow Waves] pick up where Sensuous left off, from the warm synthesizer notes to the soft drum clips, to his love of accentuating his lyrics with, instrumentals that mimic their meaning…” – Pitchfork

Japanese producer and artist Cornelius has shared a live version of “If You’re Here” along with a cover of Drake’s “Passionfruit.” The tracks were recorded in conjunction with Spotify during Cornelius’s recent US tour in support of his latest album, Mellow Waves.

Cornelius will be making a triumphant return to Europe this summer, with a slot at Field Day Festival on Saturday 2 June as the UK exclusive show. He will also be playing the Sónar Festival in Barcelona later in June.

The innovative musician recently wrapped up a North American tour performing songs from his most recent release Mellow Waves that began at NRMAL Festival in Mexico City, stopping in New York, Pittsburgh’s Andy Warhol Museum, and down the west coast. On the tour, Cornelius also stopped into NPR’s offices for a Tiny Desk Concert (Link).

Mellow Waves, Cornelius‘s first album in over 11 years, mixes eastern avant-electronica and krautrock with jazz and bossa nova. It is the artist’s most personal work to date, focusing on melody and the tremolo sound.

Cornelius made his name in the 90s as “the Japanese Beck,” with cult albums such as the genre defying Fantasma (1997), which mixed the 60s harmonies of The Beach Boys with krautrock and French pop, and the precise found-sounds glitch electronica of Point (2002) and Sensuous (2006), as well as remixes of Blur, MGMT, Bloc Party, The Beastie Boys and more. As Patrick St. Michael from Stereogum explains, he created; “a genre-skipping and time-traveling take on pop that defined ‘cool’ to many in Japan over the decade (not to mention get him critical love and a label deal abroad [with Matador Records]).”