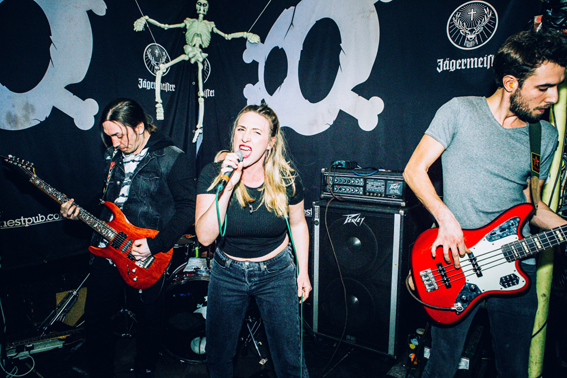 “Building to a raging climax complete with slick riffs, it’s a riotous blast of sound that’ll hit your ears with its defiant ferocious force.”  Get In Her Ears on “Bitter Sweet”

“a melee of crackling guitars riffs, thunderous drumming and power-pop hooks.”  The 405 on “Blighty”

“Live, the band are a blur of fresh ideas and quicksilver riffs, songs that explode then dissipate in the blink of an eye.”  Clash Music

Following on from their blistering first single, “Blighty”, Brixton’s Coltana have just shared their latest single, the ferocious “Bitter Sweet” via Get In Her Ears who wrote, “Propelled by whirring hooks and front-woman Cat’s impassioned spoken word vocals, it races with a thrashing energy and the band’s trademark refreshing brutal honesty.”

Of the track, Cat explains: “‘Bitter Sweet’ has all the ingredients that Coltana like to cook with. Light and heavy dynamics, spoken word-esq vocals followed by sing along choruses and a guitar solo thrown in for good measure. This song packs a punch but manages to push and pull the listener in the right direction at every juncture.”

Out June 15th on Poeticat Presents, Blighty is Coltana’s debut EP – a record that captures the band at the start of their ambitious and expansive sound.

Don’t miss the band on tour next month – more dates to be announced shortly: