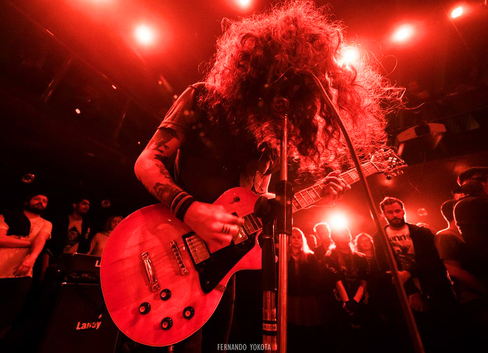 Brazilian trio DEAFKIDS are touring this summer in support of their full-length Configuração Do Lamento (Neurot Recordings), which you can stream via Bandcamp. The band remark…”we’re very excited about touring Europe again for the third time, but this time it feels very special as we’ll be supporting the Mighty Neurosis for some dates. We’re also very happy to be working with Swamp booking now – when we checked their roster for the first time and saw names like Terry Riley, Ariel Kalma and Jarboe, we felt really honoured to be part of this powerful team. Can’t wait to bring our music to spread it all over, meet some new places, make some new friends, share the stage with great artists and literally destroy everything with the power of our third-world dystopian sonic discharge.”

…AND MORE DATES TO BE ANNOUNCED

Read on for more information about the album…

DEAFKIDS’ Configuração Do Lamento is an untamed release, happy to juxtapose monolithic drone riffs with frantic polyrhythmic detours, the band citing the syncopated beats of African drums as a major influence. It is a guttural, scorched mutation of psychedelia, that similar intent of frying the listener’s perception, while void of anything approaching earthy wistfulness, wholly fluid in nature, paying no heed to any musical expectations other than the creators own internal logic. A bombardment of clanging percussion sits below relentless guitar battering, and a whole host of electronic tamperings, effects which in practice manage to further confound the proceedings. Using the term psychedelic in the absolute loosest sense is apt, as the band claims that “non-genre genres” are a chief source of inspiration, referencing anything from their own background in punk, right the way through to spiritual jazz, practically any form which allows the artist to experiment with the utter extremes of musical expression.

While DEAFKIDS’ Configuração Do Lamento was self-released on cassette in Brazil in 2016, Neurot Recordings last year officially released the album worldwide on CD and 10” vinyl formats as well as all prime digital platforms. Find physical order options and merch bundles at the Neurot Recordings webshop.
https://deafkidspunx.bandcamp.com
https://www.facebook.com/deafkidspunx

ARTHUR BUCK RELEASE VIDEO FOR NEW SINGLE  ‘ARE YOU ELECTRIFIED?’