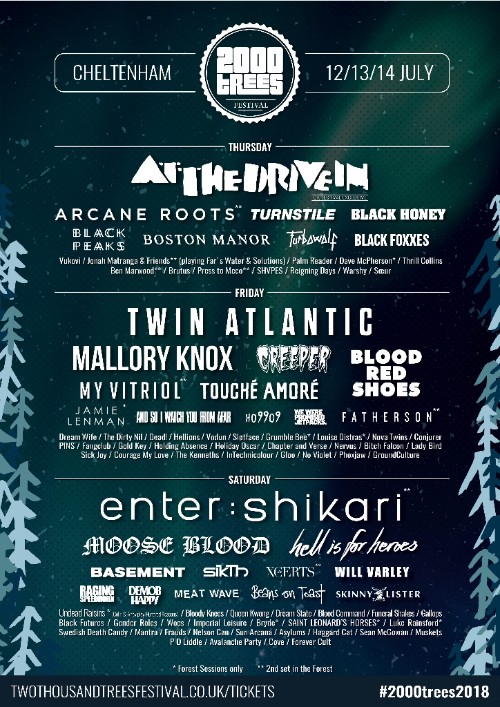 The sixth and final 2000trees Festival 2018 band announcement is here, and it includes some incredible new additions and well as the full Forest Stage (acoustic) line up. The Forest Stage is 2000trees Festival hidden gem, home to some of the most essential sets and performances from years go by. Nestled inside a forest near the main camping site, its stunning location and small, triangle stage is a must do accross the festival weekend, really bringing into focus this great events ethos of wonderful music played with passion in breathtaking locations.

As well as these additions, the incredible Forest Stage line up can also now be announced, and includes some of the already playing acts from this years event – including Enter Shikari, Arcane Roots, Fatherson and The XCERTS – as well as a host of other, brilliant acts and talent just booked for this stage. These include the gentleman genius and 2000trees Festival legend Jamie Lenman, the fast rising and dare we say it, essential Louise Distras, the wonderfully smart and witty troubadour Rob Lynch and INME front man (and all round 10/10 human being) Dave McPherson.

On top of ALL that, as with every year, the Forest Stage will also be a home for some of the countries most exciting new and rising student talent, with over 15 acts from BIMM playing throughout the weekend, as well as students from the University of Gloucestershire.

The festival also announced 5 bands over 5 days a few weeks ago, which were: TURNSTILE / FATHERSON / JONAH MATRANGA (Playing Far’s ‘Water and Soloutions’) / THE DIRTLY NIL and UNDEAD RAISNS (Colin and Andy from Hundred Reasons)

From Mallroy Knox – “We’re really happy to be coming back to play 2000 Trees again this year. 2000 Trees has always been one of our favourite festivals and it was one of our highlights in last year’s calendar. We were really eager to come back and play this great festival when we heard there was an opportunity to do so. This is our third time playing here now but our first as a four piece, and we’re excited to play some new songs we’ve been working alongside older tunes.”

From Skinny Lister –  “We’re excited to be back at the amazing 2000trees Festival. You can expect the usual shanty punk antics, the flagon of rum & we’ll be road testing a few new tracks from our forthcoming album! Can’t wait!”

From Vodun – “We are excited to be playing 2000trees Festival this year and can’t wait for the rapture! Unleashing new songs from our new album ‘ASCEND’ to the masses. We are honoured.”

From Beans On Toast – “I’ve played 2000trees Festival a fair few times over the years. It’s a brilliant festival full of wonderful people having the greatest times.”

From 2000trees Festival organiser James Scarlett –  “The Forest Sessions is one of my favourite things about the festival, so I can’t wait to see what the artists can pull out of the bag this year – particularly Enter Shikari who I know have something special planned! It’s a chance to see artists play stripped back sets out of their usual comfort zone and often produces the highlight of the festival. The Jamie Lenman covers set from 2016 is probably the best thing I’ve ever seen at Trees and Frank Carter & Hundred Reasons last year were incredible.”

Happening on Thursday 12th July/ Friday 13th July/ Saturday 14th July, tickets for the event are on sale now and can be purchased from – HERE