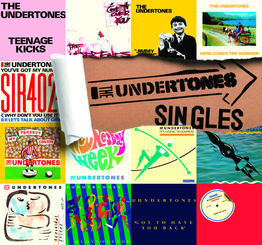 THE UNDERTONES ‘SINGLES’
13 x 7” Singles Box Set 1978-1983
Release Date: Record Store Day – 21st April
7” Undertones singles from 1978-1983, cut from original analogue tape transfers on 40g vinyl, in rigid card slipcase
Original single artwork replicated, ‘Teenage Kicks’ original poster single, additional poster with photos/notes by The Undertones + track by track comments from bassist Michael Bradley
Formed in Derry in 1974, The Undertones consisted of the O’Neill brothers – John and Damian on guitars, Michael Bradley on bass, Billy Doherty on drums, and Feargal Sharkey on vocals. Even by the standards of that decade, Derry was not the rock and roll capital of anywhere. Like countless others, punk rock fired their imagination and they learned to play by listening to mail order records, reading one of the few copies of NME that made it to Derry but most of all, from listening to John Peel’s show on BBC Radio One. A love of Garage bands helped formulate their predilection for songs with strong chorus hooks, keeping songs short, economical and dynamic.
With little success initially, the band were on the verge of quitting when the small but influential Belfast label ‘Good Vibrations’ took them on. The song ‘Teenage Kicks’ was released as their debut single in September 1978 and caught the attention of the BBC’s John Peel, who went on to champion the track and band. Although the single failed to chart, it did on its re-release in October 1978. A tale of adolescent yearnings, its greatest strength lies in its simplicity from the buzzsaw guitars to the two angst-ridden verses and the singalong chorus. Peel played it incessantly, proclaiming it the greatest single ever, and it helped the band win a major label deal with Sire Records who re-released it, resulting in the band’s first appearance on Top of the Pops.
Over the next five years before their eventual split in 1983, The Undertones released four studio albums and thirteen singles, all of which are included here. The band continue to tour and perform at venues and festivals throughout the UK and Europe.
Tracklisting:
Single 1:
A. ‘Teenage Kicks / ‘Smarter Than You’ B. ‘True Confessions’ / ‘Emergency Cases’
Single 2:
A. ‘Get Over You’ B. ‘Really Really’ / ‘She Can Only Say No’
Single 3:
A. ‘Jimmy Jimmy’ B. ‘Mars Bars’
Single 4:
A. ‘Here Comes The Summer’ B. ‘One Way Love’ / ‘Top Twenty’
Single 5:
A. ‘You’ve Got My Number (Why Don’t You Use It!)’ B. ‘Let’s Talk About Girls’
Single 6:
A. ‘My Perfect Cousin’ B. ‘Hard Luck Again!’ / ‘I Don’t Wanna See (You Again)’
Single 7:
A. ‘Wednesday Week’ B. ‘Told You So’
Single 8:
A. ‘It’s Going To Happen!’ B. ‘Fairly In The Money Now’
Single 9:
A. ‘Julie Ocean’ B. ‘Kiss In The Dark’
Single 10:
A. ‘Beautiful Friend’ B. ‘Life’s Too Easy’
Single 11:
A. ‘The Love Parade’ B. ‘Like That’
Single 12:
A. ‘Got To Have You Back’ B. ‘Turning Blue’
Single 13:
A. ‘Chain Of Love’ B. ‘Window Shopping For New Clothes’
www.theundertones.com
https://www.facebook.com/OfficialTheUndertones/