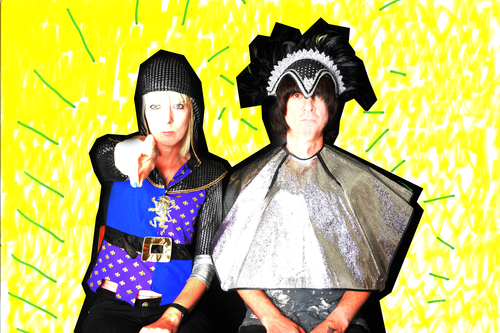 New album This Is Eggland out now

On Tour in May with support from Mr Ben & The Bens
and comedian & poet Rob Auton
Nottingham, Sheffield, Bristol and Cambridge shows sold-out!
Festivals in the Summer!
London’s The Scala in October!
(see dates below)

With the country in the grip of Egg Mania surreal DIY punk rockers The Lovely Eggs return with their latest single “Big Sea” released on 7” surf blue vinyl and will take to the road in May for another bout of UK tour dates. Taken from their newly released and critically acclaimed album This is Eggland ,“Big Sea” explores the mysteries of the universe and is a rallying anthem to everyone who wants to live life different.

“It’s a pretty deep song really,” said Holly, “It questions the ridiculousness of human ritualistic behaviour and tries to look at what life is all about, the universe and stuff, and the mystery that weaves its way through everything.”

Since its release in February This is Eggland has won high praise from critics and fans alike. The Independent’s 4* review described it as “a giant leap forward” with The Guardian describing their single “Wiggy Giggy” as “marvellous.”

Produced and mixed by Grammy award winning producer Dave Fridmann (Flaming Lips, Mercury Rev, Tame Impala) and self released on their own label Egg Records, This is Eggland confounded expectations, hitting number nine in the UK Independent National Album Chart, it also made it to number 23 in the UK Vinyl Charts and overall number 136 in the UK National Album Chart – although, had they towed the industry line and not sold the album direct to fans via their website and gigs before release day, they would have been in the top 45! Their single “Wiggy Giggy” was number eight in the Official Vinyl Singles Chart, again despite most sales coming from gigs and their own website. The album CD had to be repressed twice and the vinyl once in the first week alone. As industry outsiders, all this was achieved without the help of management, booking agent or record label support.

The Lovely Eggs are one of the most unique, innovative and genuine bands on the British Underground music scene. Holly Ross (guitar/vocals) and David Blackwell (drums) have built up a cult following, selling out gigs across the UK, as well as gaining support from BBC 6 Music and Radio One. Heavier and more in-your-face than anything they’ve done previously, This is Eggland brings together a fierce DIY ethos, surreal sense of humour and kitchen-sink realism, creating an explosive blend of motoric krautrock, 60s psychedelia and punk rock attitude.

The album received a tremendous response from radio. It was declared “Album of the Day” by BBC Radio 6 Music who also added their single “Wiggy Giggy” to the BBC 6 Music playlist. Steve Lamacq stated, “I can’t get enough of this record at the moment,” and made it the “Lamacq livener” (where it has been played every day for a week). It went on to win Roundtable and was the most popular track on both Steve Lamacq and Marc Riley’s show on consecutive weeks. The pair played their seventh live session for Marc Riley in February before heading out on a sold out tour of the UK, with 9 out of 10 dates sold out in advance.

In April the band will release a special edition of This Is Eggland on giant fried egg vinyl especially for Record Store Day on 21 April. Limited to an eye watering 500 copies, the LP will appear in a special hand packed sleeve, designed by the band with the giant fried egg in its own polythene display sleeve with a uniquely designed cardboard top. This is a true gem for any collector. They will also make an appearance at Rough Trade Nottingham for a special in-store live performance on Record Store Day itself.

To coincide with the release of their new single “Big Sea”, the eggs will take to the road for a string of UK tour dates in May and June, this time with their pals Mr Ben and the Bens (a firm favourite of Marc Riley) and poet and comedian Rob Auton, before a summer-full of festivals and their biggest headline gig to date at The Scala in London on 28 October.

“The duo’s sound has toughened, their edge has sharpened and their approach has streamlined as they’ve become more and more the most perfect version of themselves.” Drowned In Sound 9/10

“Not since Space Ritual-era Hawkwind has anyone so successfully combined workboot riffing with the swirling bleeps of the unexplored cosmos.” Record Collector

“This is Eggland is a relentless, heartfelt statement of intent. You wouldn’t bet against them unearthing glory from the fringe for decades to come.” The Quietus