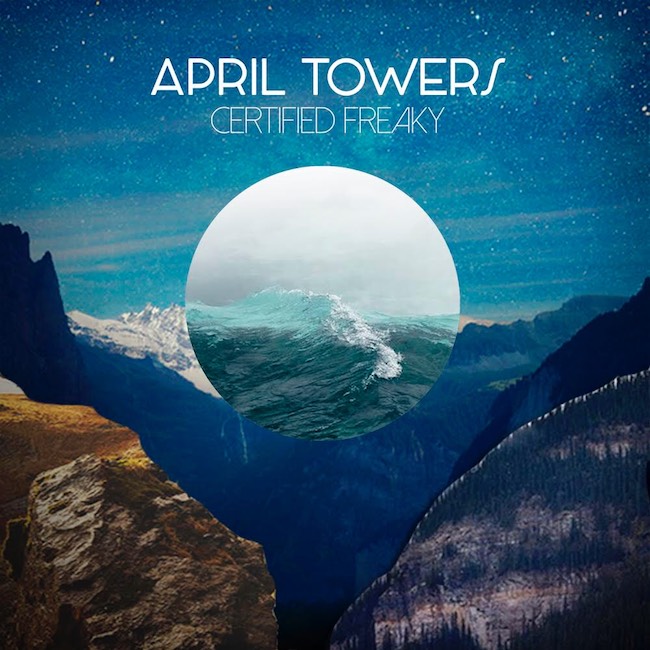 Thirty years ago, I’m sure April Towers would have been my new favourite band. In the coming months they could very well be yours” – Drowned in Sound
“They have got the energy for it all. Most likely to join Chvrches in the synth revolution” – DIY Magazine
“The band create a powerful slab of noise.” – The Line Of Best Fit
“A sharp, stylish piece of synthetic pop, in that warmly British lieage of Pet Shop Boys or Sait Etienne” – Clash

Nottingham duo April Towers have announced their debut album ‘Certified Freaky‘ will be released on 8th June on Full Frequency Sonics/Republic of Music.

The duo has now shared the video for the album’s first single ‘Tel Aviv’. Of the video they say: “Water is a key theme of the upcoming album so we headed to the Cornish coast to take in the stunning scenery. We loved experimenting with the lighting and feel of the video to reflect the intensity of the record and what it means to us.”. The video was directed by Sean Robinson.

April Towers have announced a string of dates in teh UK, including  a headline show at Oslo, London on 15th June:
THURSDAY 19TH APRIL @ ARCHSPACE – LONDON w/ DISKOPUNK – TICKETS
TUESDAY 22ND MAY @ LENDING ROOMS – LEEDS – TICKETS
WEDNESDAY 23RD MAY @ SOUND BASEMENT – LIVERPOOL – TICKETS
THURSDAY 7TH JUNE @RESCUE ROOMS – NOTTINGHAM – TICKETS
FRIDAY 15TH JUNE @ OSLO – LONDON – TICKETS
SATURDAY 21ST JULY @ DEERSTOCK FESTIVAL
THURSDAY 26TH JULY @ Y NOT FESTIVAL
Recorded at Soho’s legendary Dean Street Studios (in the same room David Bowie recorded Diamond Dogs) over the course of last year, the album was co-produced by the band along with respected electronic artist/DJ Ben Pearce, mixed by Nathan Boddy (Gary Numan, Shame, James Blake) and mastered by Geoff Pesche (Gorillaz, Kylie Minogue, Pulp) at Abbey Road Studios. The whole album was crowd funded via Pledge Music and the band played a sold out show in their native city of Nottingham last September to commemorate this.
Having played together in other bands previously, the duo of Alex Noble (vocals, guitars & keyboards) and Charlie Burley (production, samples, guitars & keyboards) embarked on their latest project in August 2013 and April Towers were born. A series of 6 singles and EPs culminating in last summer’s ‘Takes One To Know One’ followed suit, one of which (2015’s ‘A Little Bit Of Fear’) earned them a place on the official FIFA 2016 soundtrack. Throughout their existence they’ve been building momentum and working towards ‘Certified Freaky’ in what has been a long but ultimately rewarding process.
Their live set has also developed over time to incorporate live bass, drums and percussion which gives it a more organic and less mechanistic feel while retaining the vibrant energy of a late night in clubland. Since forming, they’ve played numerous festivals both in the UK and Europe and this summer are already scheduled to play Y Not as well as their first ever headline slot at Deerstock in July.
With influences ranging from pioneering artists such as Jon Hopkins, Aphex Twin, LCD Soundsystem and Radiohead and a pop sensibility that recalls the likes of Pet Shop Boys, New Order, Orchestral Manoeuvres In The Dark and Cut Copy in their prime, April Towers make timeless music with one eye on the present and the other looking far ahead into the future.
Tracklisting for ‘Certified Freaky’:
www.facebook.com/apriltowersofficial