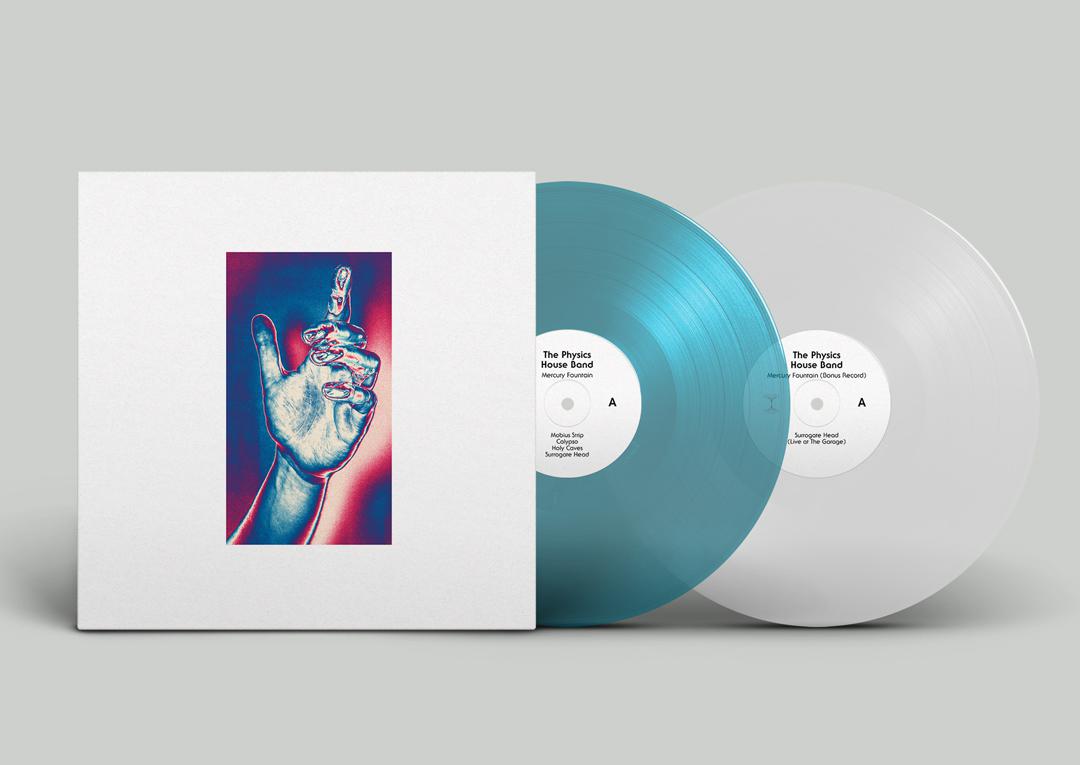 “A super-dense sci-fi mindfuck of a thing… It’s a two black Americano experience that makes me wish I still had pin-sharp hearing to lose.” –STEWART LEE

“The sheer amount of ideas and concepts it crams into its psychedelic half hour is more than some bands achieve in an entire career.” – THE INDEPENDENT (TOP ALBUMS OF 2017)

“Hell yeah… LISTEN TO IT!” – ANTHONY FANTANO (THE NEEDLE DROP)

‘Mercury Fountain’ dropped in April 2017, via Small Pond recordings, alongside a press release emphatically written by comedian and experimental music aficionado Stewart Lee, a big fan of the band. Gaining a Guardian ‘New Band Of The Week’ accolade for the young experimental Brighton trio, the record also received props from The Quietus, The Independent, The Line Of Best Fit, Clash, NPR, Stuart Maconie (BBC 6Music) and Anthony Fantano (The Needle Drop), also landing in a host of ‘Best Of 2017’ lists. The Slugabed Remix of lead single “Calypso” added to the project’s success, gaining heavy support including Tom Ravenscroft on BBC 6Music.

In the live arena, the band have toured the album to rave reactions in the UK, Europe and beyond, also playing festivals including ArcTangent,where they wowed a 3,000-strong crowd with their full-throttle and immersive set. Shows for 2018 include Brighton’s Bad Pond festival (27th-28th April) and more international dates (TBA).

The Physics House Band are Sam Organ (guitar/keys), Adam Hutchison (bass/keys) and Dave Morgan (drums); with a musical prowess way beyond their years, they create avant-garde compositions that capture everything from jazz to prog to psych to tech-metal to tech-rock, all combined with a sense of gleeful abandon and executed to perfection. Releasing their first EP ‘Horizons/Rapture’ in 2013, and playing early showsalongside Alt-J, Jaga Jazzist, Django Django, 65daysofstatic, Three Trapped Tigers, Mono and others, they built an impressive fanbase from the off – and ‘Mercury Fountain’ has taken things to the next level.

Recorded with Joel Magill and Raven Bush (of Syd Arthur) at Wicker Studios in Kent, with a wealth of vintage microphones, amplifiers, drum sets and synthesisers, the album takes a hallucinogenic journey through the mind, parallel universes and the astral plane, using the allegory of diving into a Mercury Fountain.

The Slugabed (Ninja Tune, Anticon, Activia Benz) remix – which Gregory Feldwick, AKA Slugabed, describes as “possibly the first 5/4 trap banger you ever heard” – unites two acts who share many influences including jazz, electronica and prog, but take them in different directions.

Sam Organ is also currently playing drums in the Slugabed live band, which continues to tour in Spring 2018 following shows with the likes of Lapalux and Teebs. The talents of the other TPHB members are also highly in demand, with Adam drafted in to play bass for The Go! Teamacross Europe and the USA, and Dave regularly working on experimental drum projects with electronic artists and theatre productions – alongside the busy schedule of the The Physics House Band, a truly unique act whose star is firmly on the rise.

1. Surrogate Head (Live at The Garage)