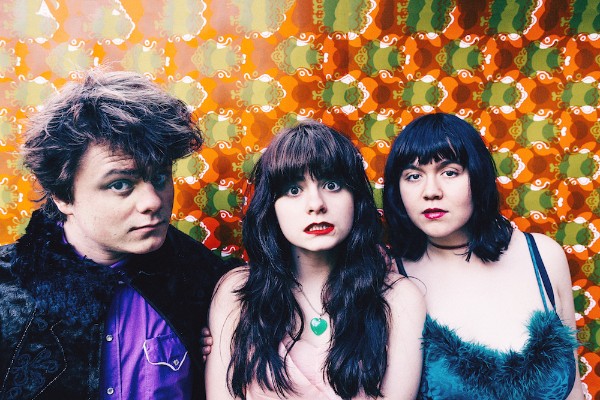 With their new album ‘The Make It All Show’ set for release on May 11th (May 4th in North America) via El Camino Media, Skating Polly have dropped a third dose of addictive, attitude-heavy punk-rock.

Following the moreish first single “Queen For A Day” (feat. vocals from X’s Exene Cervenka), and the thrashy“Camelot,” they now present the sunny-sounding ‘Hollywood Factory’ with a wry smile.

Commenting on the track, the band’s Kelli Mayo says: “We first wrote “Hollywood Factory” after I filmed a pilot for a TV show and the possibility of it getting picked up was all I could think about for a while. The lyrics were meant to poke fun at the idea of  going to Hollywood and selling out, or at least trying to sell out if Hollywood will have you. Anyway, it didn’t get picked up and we kinda swept the song under the rug with it, but right before we went in to record the album, we decided to work on it again, this time with Kurtis on board as our third member. We made the lyrics darker at some points and just more sarcastic overall. Despite the sarcasm, It’s probably the most poppy song on the record and the most cheerful one for sure!”

There’s a difficult to describe, yet timeless quality to certain songs that transcend genre or era. It’s something that you can’t fake or contrive and it’s what lies at the core of Skating Polly’s music. Admittedly the female-driven alternative acts that inspired the band such as Veruca Salt, X, The Breeders, L7 and Babes In Toyland (the latter of whom Skating Polly toured with in Europe) aren’t typical reference points for most of today’s up-and-coming bands, but maybe they should be. “The thing that we identify with in a lot of those bands is that they can be really aggressive and loud while also being super melodic,” Kelli explains, adding that the new dynamic in the band helped them to be more expansive when it came to their arrangements: “Everything happened very smoothly when Kurtis became part of the band. It just felt natural having him there and writing with him.”