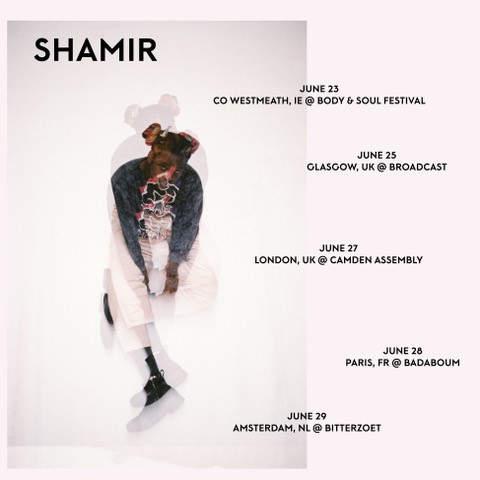 SHAMIR ANNOUNCES EUROPEAN LIVE RUN
FOLLOWING A WHIRLWIND OF RELEASES OVER THE PAST 6 MONTHS, THE LAS VEGAS ARTIST CROSSES THE POND FOR BODY & SOUL FESTIVAL, AND 4 INTIMATE SHOWS
Going back to what has always inspired him: outsider music, country and punk, Shamir released ‘Revelations’ back in November via Father/Daughter Records. The result was raw and vulnerable, showcasing songs stripped down to their emotional core.
After quickly rising to underground fame with his ‘Northtown’ EP in 2014, the DIY popstar made a sonic splash with ‘Rachet’s’ lead single ‘On The Regular,’ a poppy banger and commercial success. But how to follow all that up? Shamir, who came from the dusty dunes of Las Vegas, to Brooklyn’s Silent Barn, to the Philly indie scene (and all over the world inbetween), wanted to go back to what had inspired him from the beginning. And what do you do if XL drops you? If you’re Shamir, you put out an album you recorded yourself all in one weekend, whilst questioning the decision to quit music. The record was called ‘Hope’ and Shamir self-released it via SoundCloud during the spring of 2017, with no promotion or label support. Regardless & naturally, it was a critical hit.  Less than two weeks after the record came out, Shamir sustained a psychotic episode which caused him to spend time in a psychiatric hospital where it was determined he had bipolar disorder. Back home in Las Vegas to recover and rebuild, Shamir wrote and recorded most of ‘Revelations’ in two weeks.
In the short 6 months since the album release, Shamir has been prolific, releasing a 7” titled ‘Room’ in March, and another full-length titled ‘Resolution’ via his Bandcamp page. In case you missed it, you can listen to that along with ‘Room’ here.
LIVE DATES
June 23rd – Body & Soul Festival, Co Westmeath, Ireland
June 25th – Broadcast, Glasgow
June 27th – Camden Assembly, London
June 28th – Badaboum, Paris
June 29th – Bitterzoet, Amsterdam
Twitter