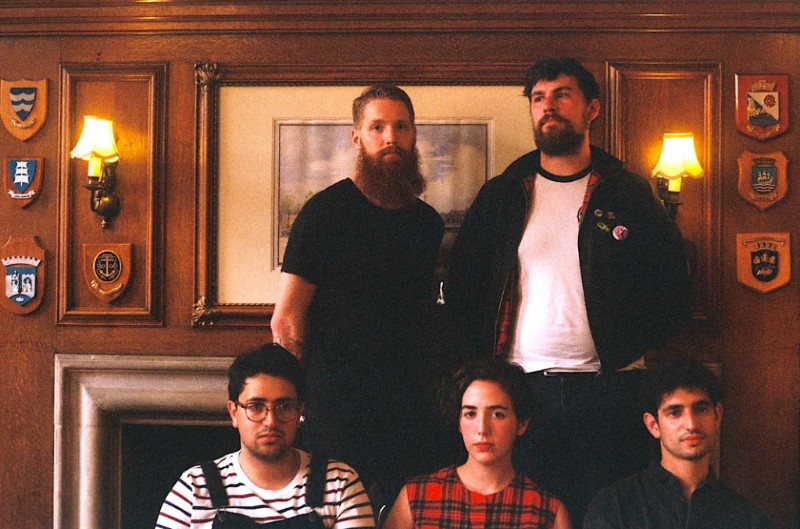 Following their return a few weeks ago with their first track in two years, Little Jack, angular art-rock quintet Post Louis have revealed another brand-new experimental-indie gem, Stress Fracture.
Post Louis’ music has always addressed fragility. Stress Fracture pushes this interest to its logical conclusion, depicting actual damage, breakage and decomposition. Throughout the infectious track, lead vocalist Stephanie Davin toys with the parallels between physical and emotional damage – how so often they can feel the same and how they can reinforce each other. (“Mainline, please drive in my direction / Plastic wrapping for my protection / Car curl, lamppost, stretch out your veins / We might saloon our hearts in winter”). Spikey guitar parts and contrasting male vocals appear from nowhere at different points throughout the song, creating a feeling of relentlessly being ‘on edge’. Yet more unpredictable are the wild tenor saxophone entries, courtesy of rising jazz star Alex Hitchcock.
In Stephanie’s words: “We wanted Andy’s backing vocal and Alex’s saxophone parts to tumble in out of nowhere, like a car falling off a highway. This song tracks the moment when panic sets in, temperature rises and emergency begins – when something fundamental gives way entirely, whether a bone or a belief.”
Post Louis emerged in 2013, releasing two EPs and a standalone single to immense critical acclaim, praised by the likes of Pitchfork, Clash, Dummy, Rolling Stone, LOBF, Quietus, DIY. The band, its members now spread out across England, Scotland and Germany, then withdrew to write and record.
Songwriters Stephanie Davin and Robbie Stern (Cajun Dance Party, guitar with Fryars) retreated to a remote cottage in Wales during the winter, armed only with a looper and a Dictaphone. They took the material that surfaced from their time away to the rest of the band (Mattis Moviken, Andy Stern, Adam Turner-Heffer) and formed brand new songs through meticulous playing, testing, deconstructing and experimenting at the Norwegian Church (Sjømannskirken) in South London where the band rehearse.
The result was a collection of songs that are complex and interweaving, and like nothing the quintet had ever created before. Self-produced, the tracks are carefully composed to expose the playing styles and personalities of each band member.
As the music, and the process of creating it, became more personal and vulnerable, so the songs have started to address darker and messier themes. The previously released EPs were preoccupied with the ways in which people can damage one other – the small-scale methods by which individuals can be cruel, sometimes without realising. Post Louis’ new writing extends this gaze, taking in questions about love, labour, effort and blame. The vocals are bolder, fluttering between vulnerability and anger.
This is a slow-burn, collective project built on intimacy, trust and patience. Robbie and Andy are brothers. Stephanie’s brother helps to produce their music. The beautiful, cavernous Norwegian church building has been home for both Mattis and Adam, as well as a second home and studio space for the whole band and can be seen in the group’s recent press shots.

Alt-rock duo Leisure Tank step into the spotlight in new video for ‘Higher’!