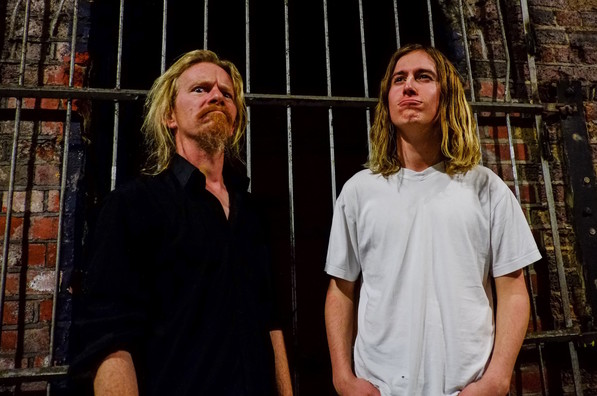 NOISEPICKER SHARE THE SELF-MADE VIDEO FOR “NO MAN LIES BLAMELESS”
FROM THEIR DEBUT ALBUM PEACE OFF, INCOMING VIA EXILE ON MAINSTREAM ON THE 11TH OF MAY;
UK LIVE SHOWS COMMENCE NEXT WEEK

“As the song goes: “look around and see the trail of filth they leave behind”. The human race is a petulant child that needs to grow up and take responsibility for it’s actions. Unfortunately, in order for that to happen it needs to go through puberty and adolescence. We’re fucked. The rage has only just begun, and none of us are blameless!”
– Harry Armstrong

Noisepicker, the duo of Harry Armstrong (End Of Level Boss, Lord Of Putrefaction, Decomposed, Hangnail and The Earls Of Mars) and drummer Kieran Murphy have released a self-made video for their album opener “No Man Lies Blameless”, taken from the debut, Peace Off (Exile On Mainstream, 11th May). The pair have also announced some live dates in support of the album – see below.

Heavily influenced by their love of distorted heavy sounds, and blues music, as well as the spirit of the UK punk scene, Noisepicker’s Peace Off is an album of heavy, gritty, gnarled and thrashing blues romp, which takes a myriad of sonic twists and turns throughout, making it one unpredictable listen. The album is released as 180g black LP in a beautiful gatefold sleeve containing artwork by Roland Scriver and is not available as CD-only release. The LP will contain the full album on CD as well. Pre-orders are now live.
Noisepicker live dates:
01/05 Coventry, The Phoenix (w/ Zolle)
02/05 Bristol, Mother’s Ruin (w/ Zolle)
03/05 Colchester, The Bull (w/ Zolle)
04/05 Alton, The Lounge Bar
12/05 London, The Underdog Gallery
It’s time to pick your noise and eat it.

TRACK LIST:
1  No Man Lies Blameless
2  So You’re Sick?
3  A Taste Of My Dying
4  He Knew It Would All End In Tears
5  O What Mercy Sorrow Brings
6  I Hear You Talking And It Sounds Like Bullshit To Me
7  This Is How The World Will End
8  Burning The Witch
9  The Day When All Hope Died
10  I Stood By Her Grave