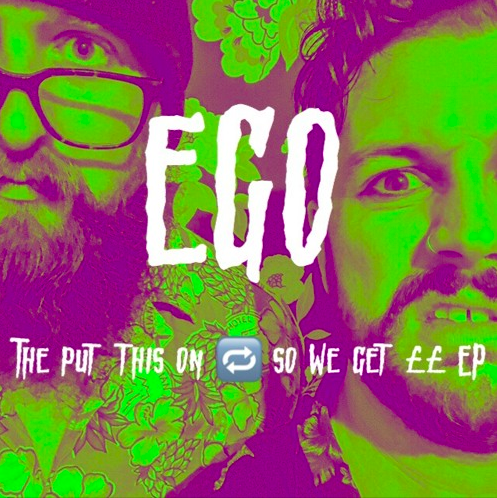 There’s a new duo on the scene and they’re causing such a stir that we need to direct your attention to them. Introducing EGO, a dynamic and dangerous 2 piece who are about to release their debut EP “The Put This on Repeat so We Get ££”, due May 18th and a must hear!

EGO consist of Mark Nicholas formerly of Ohboy and Sean Grant of S.G & The Wolfgang (a name familiar to Circuit Sweet). Many years ago the pair played together as Buick Mckane and now they’ve formed a union-ship once more.

Their forthcoming 4 track EP is a release set to obliterate. It’s a driven record firing on all cylinders, progressive, heavy and equally more-ish.

The first track to be unveiled is titled ‘Social Media Sux’ a punk powered dirty projection. A short and snappy composition with a core message, that of the title. It’s an incredibly powerful track and gives you a taste of what you can discover from this new outlook. Discover a bite of ‘Social Media Sux‘ which the band have recently unveiled as their first single over on their iTunes where you can also preorder their EP.

EGO have been described as similar to Slaves, Jamie Lenman and Fizzy Blood; although the band themselves say “Royal Blood if they had a troubled upbringing and were good”.

Their forthcoming stand out record is built on blistering contemporary-punk high energy. Infectious hooks throughout, raw riffs, brash beats and triumphant vocals. “The Put This on Repeat so We Get ££” is entirely relentless with it’s intensity from start to finish. A brilliantly bold debut from this auspicious act.

Ahead of the EP release, we are honoured to spend some time delving into the making of the record after chatting to Sean in order to discover more on EGO….

Firstly Introduce yourselves and your role within EGO

Sean I do the strings melodies, vocal la’s and ra’s. Mark does the big bada booms.

We actually played in bands together growing up in our home town of Northampton before splitting up for a few years. I realised Mark wanted me back because he started texting me again after his previous band “OhBoy” disbanded so we thought we’d give it another try, as I had free time waiting for the S.G Wolfgang album to be finished, and Mark, well just had free time. Our meaning of “Ego” is in psychoanalysis, the part of a person’s mind that tries to match the hidden desires (= wishes) of the id (= part of the unconscious mind) with the demands of the real world.

Tell us about what makes you create music?

I have a very loud over analytic brain that sometimes keeps me up at night or helps me write some incredible things. I’m a huge music fan as well so I’m constantly on the hunt for new music that I haven’t heard, I find that hugely inspiring.

We want to know what are your collective influences that shine through in your work?

Me and Mark have always come from an alternative rock background, Mark introduced me to early Biffy Clyro the Vertigo Of Bliss album and I instantly fell in love with that style of intelligent rock. There was a collective of bands around that time, Oceansize, Reuben (Jamie Lenman), People in Planes, Sucioperro (who we were lucky enough to tour with in previous outfits). So when we decided to do Ego we stripped ourselves back to old loves as we wanted to do something we both really loved and for that reason alone.

You’re about to unveil your debut EP, describe your writing process together/recording process and how you’ve managed to get to the point of this notable release.

The goal initially was to write a live set so we could go and gig. It came together very quickly and we ended up playing a live show supporting Pulled Apart By Horses which was a blinder! After that we sat on the rough early demos for a few months, and as soon as there was a viable gap in our schedules we got the EP down and got a release date. We didn’t want to mess around with it too long, we wanted it to be organic, truly representative of us… A real back to basics Alternative Rock EP.

Your debut single is titled ‘Social Media SUX’ and as a conscious effort you’ve also shyed away from the likes of facebook- tell us more about this single and what it means to you?

It was the latest thing we wrote, it came about after recording the EP and we were deciding how we wanted to release it and what we were going to do with social media and websites etc. We both agreed social media sucks, with the world as it is and the way it is used giving us a more and more polarised view of the world *ahem* Trump… For artists as well it is of course a powerful tool but with things like Facebook paid reach which without only allows about 10% of your very own fan base to see your posts, also adverts etc it becomes more about who has the biggest budget to reach your own fans, which we wanted no part of. We decided that the lesser evil was Instagram and a website for people to find us so we went with that. We did toy with the idea of none at all but in this day and age I think that would have been shooting ourselves in the foot.

What does the final finished EP mean to you both?

It means a hell of a lot, this is the EP we always wanted to make and now through our musical experiences apart, connecting back together we’ve been able to create it and put it out there. It’s music that we both really love playing and hearing so if it reaches people and they love it then that’s amazing, that’s all we wanted to do.

Have you got any live shows on the horizon? If so what can we look forward to from your performance?

Yes we have our EP release show May 20th, Milton Keynes, The Craufurd Arms… Then a run of dates in July too. It’s sounding huge and it’s a lot of fun, I think huge fun is what you can expect.

It cycles round different ones for different reasons, I love playing “Waiting For God To Hit Me” which is the last track on the EP because it’s just this horrible monotonous repetitive monster going round and round with now explicable ending or beginning. But then Social Media SUX is so much fun too, mainly

Because it’s only 1:32s long, BBC Introducing have already got behind it too thanks to Mr Lal Muttock, so we know it’s a cheeky fave.

Where can people keep up to date with your releases and live dates.

Hit up that gram:

We’ll be throwing out some music vids around the release for everyone and we’re doing a limited run of cassettes that we’ll be selling at shows that will have a download link too!

So come out and see us here:

A huge thank you to EGO for sharing some time with Circuit Sweet. The new record is incredible and we wish you all the best with this release.