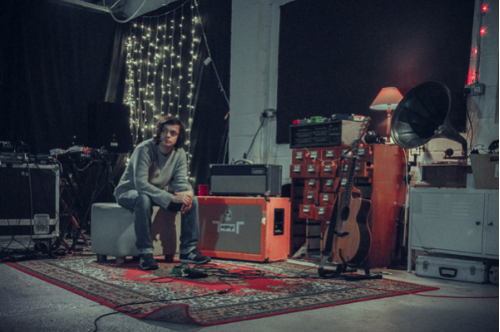 GET CAPE. WEAR CAPE. FLY. releases his latest single: ‘Animate’ ahead of a series of Spring UK dates and festival shows.
Hitting the road with a full live band, Sam Duckworth and co. will play an unmissable headline hometown gig at Southend’s Chinnery’s venue on the 12th May 2018 before supporting Frank Turner at the Lost Evenings Festival at London Roundhouse on 14th May as well as making other appearances at the likes of Liverpool’s EBGBs, Handmade Festival and beyond throughout the month of May. (Full dates and details listed below.)
In celebration of what will be Get Cape’s first UK tour run for over four years, Sam and band are delighted to mark the announcement with the release of new single: “Animate”.
STREAM/PURCHASE HERE“These days shortcuts are easy. Whether its ‘wikipediaing’ in a pub quiz or reading the spoilers, technology has made it easier to know it all. By taking a step back from the digital realm, sometimes we are able to feel suspense and uncertainty, in their more forgiving forms. Life is moving so fast, for me, it’s been a case of working out which shortcuts I like and which, pre digital, elements of my life I want to retain. Sometimes, that longer car
journey is a better experience.” – muses Sam Duckworth as he takes a step back for a moment’s tranquil contemplation and observation on this dreamy cut from acclaimed latest album: ‘Young Adult’. Washed in a hazy reverb and be-jeweled with sequined synthesiser lines, ‘Animate’ is a mellow, reflective and utterly joyous new single to soundtrack the sleepy awakening of Spring.
After a four year recording hiatus from the moniker, Get Cape. Wear Cape. Fly. returned with his sumptuous new album ‘Young Adult’ in January of 2018 (via the Xtra Mile Recordings imprint). Featuring a string of equally different and individually brilliant singles including “Adults”, “Always”, “Just A Phase”,“DNA”, and ‘VHS Forever’, the album was met with warm reviews, with Louder Than War praising Sam’s skill for “catchy and introspective 3 minute pop songs”, whilst Upset Magazine championed the record something of a “soundtrack to a revolution” (4/5). Making his return to the live stage with a triumphant one-off UK show at The Village Underground in London back in January to mark the release of ‘Young Adult’ (a show hailed by The Independent as “a heartfelt and raucous performance” (4/5)), Get Cape. Wear Cape. Fly is well and truly back. Catch Sam and band at the following shows – more to be announced:GET CAPE. WEAR CAPE. FLY. – MAY UK TOUR DATES 4th EBGBs, Liverpool
5th Handmade Festival, Leicester
12th Chinnerys, Southend
14th Lost Evenings, London
27th Common People, LondonGET CAPE. WEAR CAPE. FLY. – ‘YOUNG ADULT’ – THE NEW ALBUM, OUT NOWORDER HERE
FOR MORE INFORMATION www.getcapewearcapefly.com/
https://www.facebook.com/getcapewearcapefly/
https://twitter.com/forgetcape/

Andrew Wasylyk (of Idlewild) releases new video for Last of the Loved!