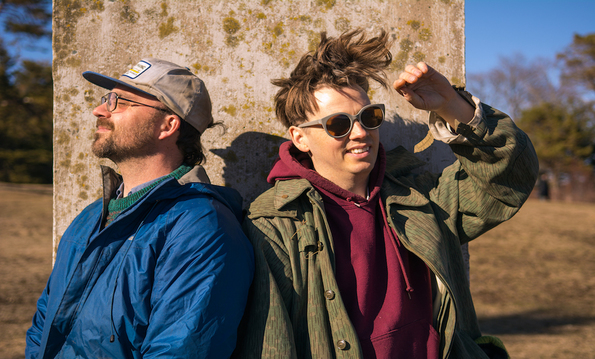 Over the last three years, JOYFULTALK has performed across Europe & Canada at avant-garde festivals and clubs alongside such acts as Micachu & the Shapes and Holy Fuck, performing compositions of wordless rivers, analogue tongue, and glitching fields of electric grass using a junked vocabulary of home-built electronics.

Crocker started his production career in 2005 in Tucson, Arizona, mentoring under esteemed analog producer Craig Schumacher (Calexico, Neko Case, Iron and Wine, Richard Buckner) during the recording of his album Below the Ocean Over. Since then, Crocker has become a sought-after producer for artists across the country. He has produced over 30 records including the Polaris Prize-nominated self-titled record for Ghostkeeper, Reuben in the Dark’s critically acclaimed Pulling Up Arrows, and NoMoreShapes’s free jazz recording Creesus Crisis among many others. Since moving to Nova Scotia, Crocker has been working out of his home studio, Prism Ship, producing recordings for artists such as Mauno and Jon McKiel.

Over the past decade, Crocker has been creating instruments of various sizes and sophistications in conjunction with experimental compositional methods. His latest homebuilt instrument is called the BIBELOT. Part instrument and part installation, it is a set of sixteen auto-composing, ceiling mounted music boxes with custom-built drives, loops, lights, and amplifiers. Using a hybrid rotation system (called the Planetary Music System) that is circular instead of linear, Crocker composed for the BIBELOT machine “Future Fantasy, 1960.” The installed machine and its music creates a sanctuary space reflecting the natural constancy of change and a sonic portal of limitless combinations. A major achievement for Crocker, BIBELOT will be installed at Moncton’s Galerie Sans Nom from 18 May through 29 June.

Crocker’s work has received critical acclaim from media including The New York Times, Globe & Mail, Exclaim!, Paris Trans Atlantic, and The BBC. He has been awarded recording and composition grants from the Alberta Foundation for the Arts, Music Nova Scotia, Canada Council for the Arts, and Nova Scotia Heritage and Tourism. His work has won an Arts Nova Scotia Artist Recognition award and has been long-listed for the Polaris Music Prize.

SHAWN DICEY BIO
Through individual and collaborative projects, Shawn Dicey has continually explored a wide array of media and venues in a practice spanning over a decade. A mostly formal entry into music combined with a decidedly informal approach to art and performance has led to Dicey’s involvement with groups of musicians, artists, and creators on projects across many genres and styles. Often centred on experimentation, interactivity and multi-disciplinary exploration, Dicey’s energy follows many paths.

Involvement with artist-run centres and residencies in Calgary, Toronto, Halifax, and Germany has produced groups of works incorporating painting, performance, video, sound and soundtracks, sculpture, and found objects. Dicey co-created and toured a well-received installation as a member of Sophie Farewell, funded by the Alberta Council for the Arts.However You Do It… Consider The Stars showed first at Calgary’s inaugural Nuit Blanche, with further showings at arts festivals in Charlottetown, Halifax, Sydney, and Atlanta.