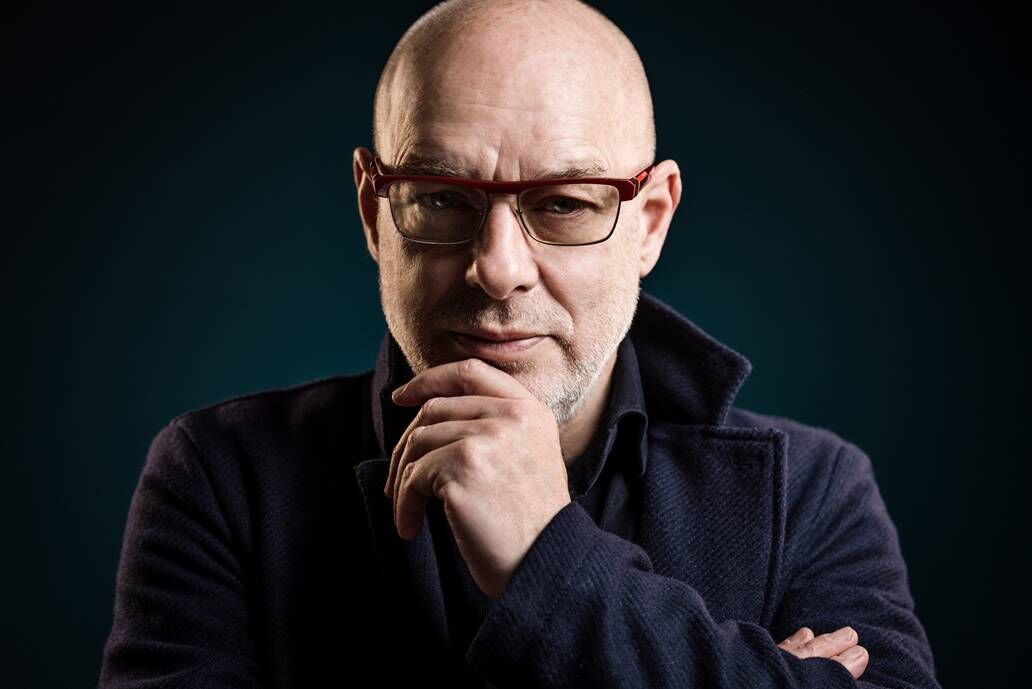 Taken from his upcoming ‘Music For Installations’ box set.
Released worldwide by UMC on May 4, 2018.

“If you think of music as a moving, changing form, and painting as a still form, what I’m trying to do is make very still music and paintings that move. I’m trying to find in both of those forms, the space in between the traditional concept of music and the traditional concept of painting.” Brian Eno
Musician, producer, visual artist, thinker and activist Brian Eno first came to international prominence in the early ’70s as a founding member of Roxy Music, and immediately followed with a series of critically-praised and influential solo albums. His visionary production includes albums with David Bowie, Talking Heads, Devo, Laurie Anderson and Coldplay, whilst his long list of collaborations includes recordings with John Cale, David Byrne, Grace Jones and James Blake.
Less widely discussed although equally notable and arguably even more prolific are his visual experiments with light and video. These are the fertile ground from which so much of his other work has grown, they cover an even longer span of time than his recordings, and have in recent decades paralleled his musical output.
These highly-acclaimed works have been exhibited all over the globe – from the Venice Biennale and the Marble Palace in St. Petersburg to Beijing’s Ritan Park and the sails of the Sydney Opera House.
‘Music For Installations’ is a collection of new, rare and previously unreleased tracks, all of which will be available on vinyl for the first time.  All of the material was recorded by Eno for use in his installations covering the period from 1986 until the present (and beyond).  Over this time he has emerged as the leading exponent of generative music worldwide and is recognised as one of the foremost audio-visual installation artists of his time.
Designed by Brian and long-time collaborator Nick Robertson, this beautifully bound package comes with a 64-page booklet featuring rare and unseen exhibition photographs and a new essay written by Eno.
Track list
‘Music From Installations’ (previously unreleased):
01: ‘Kazakhstan’
Premiered at the Asif Khan-designed installation ‘We Are Energy’ in the UK Pavilion at Astana Expo 2017 in Kazakhstan.
02: ‘The Ritan Bells’
Premiered at an installation by Eno at Ritan Park in Beijing, China as part of the British Council’s ‘Sound in the City’ series, 2005.
03: ‘Five Light Paintings’
Premiered at an installation by Eno called ‘Pictures Of Venice’ at the Gallerie Cavallino, in Venice, Italy, 1985.
04: ‘Flower Bells’
Premiered at an installation by Eno called ‘Light Music’ at the Castello Svevo in Bari, Italy, 2017.
‘77 Million Paintings’ (previously unreleased):
01: ‘77 Million Paintings’
Premiered at the inaugural exhibition of ‘77 Million Paintings’ at La Foret Museum Tokyo, Japan, 2006.
‘Lightness – Music For The Marble Palace’ (previously only available as a limited-run CD, via Enostore only):
01: ‘Atmospheric Lightness’
02: ‘Chamber Lightness’
Premiered at the Eno installation ‘Lightness in the Marble Palace’ at The State Russian Museum in St Petersburg, Russia, 1997.
‘I Dormienti’ / ‘Kite Stories’ (previously only available as separate limited run CDs, via Enostore only):
01: ‘I Dormienti’
Premiered at an eponymous installation by the Italian sculptor Mimmo Paladino at The Undercroft of The Roundhouse in London, 1999.
02: ‘Kites I’
03: ‘Kites II’
04: ‘Kites III’
Premiered at an installation by Brian Eno at the Kiasma Museum of Contemporary Art in Helsinki, Finland, 1999.
‘Making Space’ (limited-run CD previously only available at Eno installations and on the Lumen website):
01: ‘Needle Click’
02: ‘Light Legs’
03: ‘Flora and Fauna’ / ‘Gleise 581d’
04: ‘New Moons’
05: ‘Vanadium’
06: ‘All The Stars Were Out’
07: ‘Hopeful Timean Intersect’
08: ‘World Without Wind’
09: ‘Delightful Universe (seen from above)’
Compiled by Eno for sale exclusively at his installations, this was first made available while guest artistic director of the Brighton Festival, 2010.
‘Music For Future Installations’ (previously unreleased):
01: ‘Unnoticed Planet’
02: ‘Liquidambar’
03: ‘Sour Evening (Complex Heaven 3)’
04: ‘Surbahar Sleeping Music’
Pre-order here