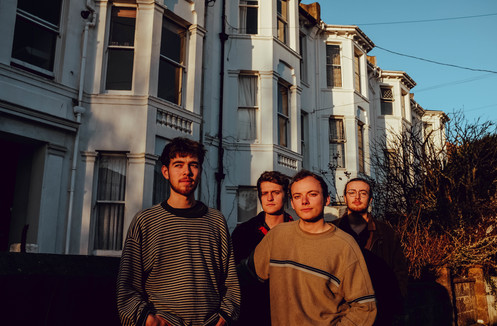 BREATHE PANEL
DEBUT SELF-TITLED ALBUM
RELEASED BY FATCAT RECORDS 13TH JULY
WATCH ‘CARMINE’ HERE
“The Brighton four-piece have enormous promise” – Clash Magazine
“Lo-fi and cagey, with more than a few hints of becoming anthemic” – DIY Magazine
Brighton based four-piece Breathe Panel combine elements of shoegaze, dream-pop and psychedelia in their up-coming debut album ‘Breathe Panel’, released 13thJuly 2018 on celebrated label, FatCat Records.
The band have now shared their latest video for ‘Carmine’, of which they tell us “is a track that focusses on a few lifelong irrational fears and the beauty that can be found in throwing them to one side by doing something new. The artwork for the track was a photo taken on a day where Josh experienced this and we wanted to create a video that captured this too. We came across the director Nick Whitworth and thought he would suit it. We filmed for a day in one of our houses in Brighton with a group of curious doves in the sky, he took the idea and captured it through mixing frantic movement with a beautiful constant.”
Meeting at University, Josh Tyler, Nick Green and Benjamin Reeves sprung out of a vibrant scene of musicians playing and gigging together. Between writing in a shared house basement and taking long walks on the South Downs, Breathe Panel have crafted their own sound based around the intuitive songwriting partnership of Josh and Nick.

Carmine by Breathe Panel on VEVO.

Recalling thoughtful days spent outdoors, Nick’s vocals wash across bright, shimmering guitars and intricate drum patterns to create something beautifully expansive yet highly introspective. They combine writing about topics including anxiety, colours, people, memories and the cure of nature with capturing a sound that makes them feel good.
Signed to FatCat Records (C Duncan, TRAAMS, The Twilight Sad) and now based between London and Brighton, Breathe Panel are gearing up to release their debut album in 2018. Recorded with Hookworms frontman and production wizard MJ at his Suburban Home Studio in Leeds, the band have drawn upon musical influences including Chris Cohen, Real Estate and Deerhunter.
Breathe Panel have already shared stages with the likes of The Big Moon and Honeyblood, and the band have built a wealth of support since the release of their single ‘On My Way’ which met critical acclaim signifying the band’s immediate promise.
Breathe Panel are: Nick Green (vocals and guitar), Josh Tyler (guitar), Benjamin Reeves (drums) and Alex Turner (bass guitar).
Facebook