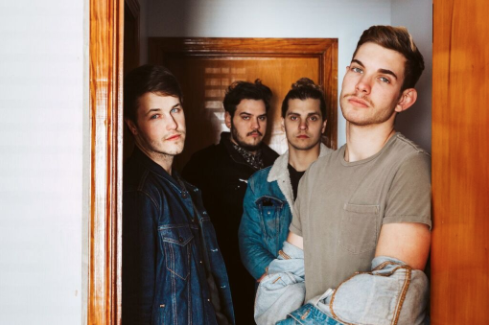 Maryland indie-pop band Blue Heaven will make their full-length debut this summer with the release of their first album, Volume One, on June 15th via No Sleep Records. The band has partnered with SubstreamMagazine.com to premiere a video for the record’s first new single, “Growing.” Fans can pre-order the album now at store.nosleeprecords.com/catalogs/blue-heaven.
Watch The Video For “Growing” Now At SubstreamMagazine.com: https://bit.ly/2HhXM9S
“For me, the song Growing is about realizing you and your significant other have lost your shine. It aims to capture that moment when you realize things are only going to get worse from there. There is a logical and emotional give and take. That there is no one fix for the problems both partners have caused. The only resolution, or the only way to grow as people, is to end.” – Levi Miller (singer/guitarist)
“Growing” is a running theme for Blue Heaven. Not only is it the powerful first single from the debut LP Volume One, it also represents a state of mind for the indie rock quartet hailing from Maryland.
“The subject matter of the album is themed around honesty and growth. Precious and temporary moments that play over and over. The vision behind the music of the album was the product of the four of us taking a breath of fresh air. With all of us coming from hardcore punk backgrounds, writing Volume One was a challenge to push ourselves as songwriters. In many ways I think the fact that we had been conditioned with so much aggressive, obscure music led us to make choices with the songs that traditional indie rock bands wouldn’t have gone for. “ – Miller
Spawned from the ashes of regional hardcore and punk bands from their younger days, the members of Blue Heaven traded blaring guitars and blasting drums for a more refined sound while still showcasing their energetic past. “Volume One” is a 12 track journey through frontman Levi Miller’s mind as he deals with heartache, regret, and passion. Self-recorded and self-produced over 2 years, the listener is dealt with the ebbs and flows of Miller’s inner turmoil during the recording process.
Where a record contains the energy of a song, the stage is a limitless platform for Blue Heaven to radiate their power. With plenty of tour dates on the horizon, it will only be a matter of time before Blue Heaven captures the eyes and ears of listeners across the country.