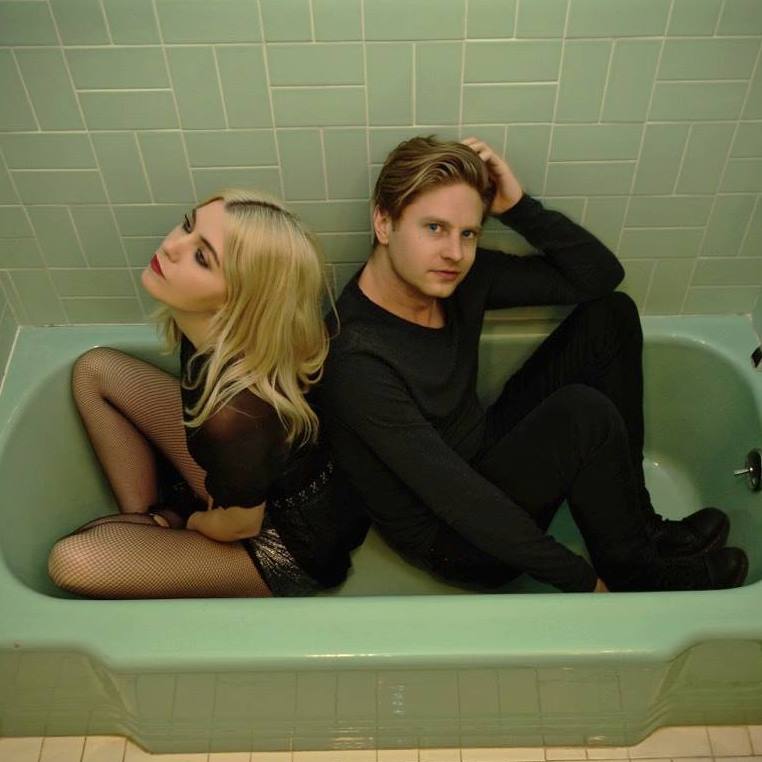 Band on tour across the US and Canada through April and May, returning to the UK for 2000trees Festival in July

Brighton 2 piece BLOOD RED SHOES return with their  brand new single ‘God Complex’ which is set for release across all digital platforms on Friday April 27th.

This new single sees the band continue down their ever creative path, as they evolve past their minimal rock’n’roll roots, and embrace growling synth bass, cinematic western-inspired guitar soundscapes and keyboard drones. “You’re never gonna make me cry” snarls guitarist- vocalist Laura-Mary, a takedown of some unfortunate who considers themselves so much more powerful than they are.

From Laura-Mary Carter – “I wrote this song in the back of a truck on the way to a town which has the population of 2 . It’s about people who come into your life when you are vulnerable thinking they can save you . But when you get better without them , they exit your life as fast as they came into it”

The band will be touring across the USA and Canada through late April and May and will be back in the UK for 20000trees Festival in July. All current, confirmed BLOOD RED SHOES live dates can be seen – HERE

The band are a Brighton based two piece that features Laura-Mary Carter (vocals/guitar) and Steven Ansell (drums/vocals), two enthusiastic punk-inspired brawlers who came together in late 2004 upon the demise of their previous bands. With one song in tow, the duo landed a gig and BLOOD RED SHOES were born.  Their name is a reference to Ginger Rogers, who allegedly had to redo a tap dance scene so many times that her white dancing shoes ended up soaked in blood.

By mid-2005, the band readied the release of their debut 7″ EP for the London indie imprint Jonson Family. With BBC Radio 1 and XFM championing songs such as the shouty “Victory for the Magpie” and “Don’t Always Say Yes,” the EP sold out in just weeks. Follow-up singles ADHD and Stitch Me Back arrived on Try Harder in early 2006. Another trio of singles, “It’s Getting Boring by the Sea,” “I’ll Be Your Eyes,” and “I Wish I Was Someone Better,” followed in 2007.

By 2008, Carter and Ansell were finally ready to release their debut album, Box of Secrets, produced by Mike Crossey (Arctic Monkeys, The 1975). It appeared that April to strong critical reviews. The duo re-teamed with Crossey for 2010’s Fire Like This, which found Blood Red Shoes shedding some of their indie-disco rhythms for a heavier, more muscular sound. The album saw them extend their touring globally, across to North America as well as Asia and the furthest reaches of mainland Europe.

In Time To Voices, again produced by Mike Crossey, came in 2012 and saw the band explore their sound further, for the first time incorporating keyboards and acoustic instruments and touching on shoe gaze and Americana alongside their trademark alt-rock sound. This album saw the band become a main stage festival act for the first time, playing to their biggest ever crowds at Reading and Leeds, Lowlands, Pukkelpop, Summersonic, Hurricane Southside and more. The band’s success and subsequent regular visits to  Germany saw the twosome fall in love with Berlin, and they promptly decamped to Kreuzberg at the end of their touring cycle and set up their own studio to write and record album four.

Emerging in late 2013 were the first fruits of this new arrangement, with the lead track “The Perfect Mess” being entirely self-produced and released via an innovative PR campaign. Fans in 10 different countries had to use their smartphones in order to find clues and unlock a new song. Initially scheduled to take a few days rabid fans from around the world unlocked the song in a matter of minutes. The full length, self-titled album followed in 2014 and displayed the raw, hard-edged feel captured by recording in the ex-industrial area of East Berlin.

After a long tour in support of their last album, the band decided to try somewhere radically different to write the new songs: Los Angeles. A stark contrast and thousands of miles from the foreboding concrete and steel of Berlin, L.A. provided the perfect opportunity for the band to explore new styles. After taking a well-earned break for 2015, the band spent 2016 writing new material.  They fell in love the with the deep bassy sounds emanating from every passing car in L.A., feeling the groovier tempos of the west coast and indulging their love for all-out pop hooks. After playing a choice few European festival performances throughout late 2016, the band once again returned to their new creative homeland to record with Grammy-winning producer Nick Launay (Arcade Fire, Nick Cave, Yeah Yeah Yeahs) to work on their 5th studio album. Scheduled for release in 2018, their 5th album sees the band wholly reinvent their sound, no longer a rock n roll duo but an ambitious, widescreen, vivid reincarnation incorporating loops, synths, electronics and vocal processing alongside their ear for classic hooks and attitude-laden delivery.