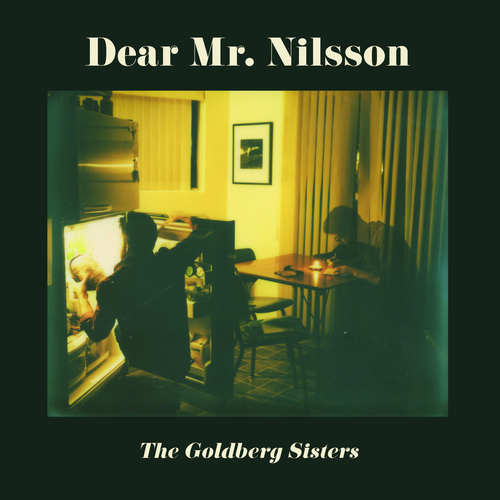 Adam Goldberg / The Goldberg Sisters Share New Track
“Dear Mr. Nilsson”
Via All Things Go
New Album
HOME: A Nice Place To Visit
To Be Released May 4th
Fourth Album from The Musical Alias Of
Actor / Musician / Filmmaker / Photographer
Adam Goldberg
On May 4th psych-pop artist The Goldberg Sisters will release their new album HOME: A Nice Place To Visit. Known as the musical alter-ego of actor, musician, filmmaker and photographer Adam Goldberg, (and his mythical sister-twin “Celeste”) The Goldberg Sisters today have released the new single “Dear Mr. Nilsson,” written in the form of a letter to the iconic singer/songwriter Harry Nilsson. Goldberg explains that the track is “about the futility of trying to compose a song that measures up to Nilsson’s work. Somewhat ironically I wrote and recorded the demo for this in about 2 hours.” The song is currently streaming via All Things Go.
The Goldberg Sisters recently released the track “The Kids Are Alwrong” via Under The Radar, as well as “When Or Where Or Why” which Billboard which describes as “lushly melodic.”
Movie audiences got to know Goldberg from his performances in films such as Dazed and Confused, Saving Private Ryan, The Hebrew Hammer, A Beautiful Mind, and 2 Days in Paris as well as from equally memorable appearances in TV shows like Friends, Entourage and Fargo. Music fans, however, haven’t always found him so easy to pin down. This year they‘ll have his brilliant new album, HOME: A Nice Place To Visit.
Goldberg recorded the 2009 dream-pop album Eros and Omissions over a six-year period with a variety of musicians, including Steven Drozd of The Flaming Lips. But the pace quickened on the first two albums issued under the Goldberg Sisters moniker, 2011’s self-titled offering and Stranger’s Morning from 2013, on which Goldberg played all the instruments and which was recorded by engineer and longtime collaborator, multi-instrumentalist and singer-songwriter Andrew Lynch (Nav/Attack) in Goldberg’s garage.
Goldberg and Lynch teamed up once again in the garage for the new Goldberg Sisters’ album, HOME: A Nice Place To Visit. Goldberg again did all the instrumentation save for violins and trumpet. Goldberg’s elasticity as a multi-instrumentalist and producer is nothing short of astonishing considering he lacks anything in the way of formal training and didn’t even think of seriously making music until his early 20s. “I started playing drums as a kid,” he recalls. “I played along with songs on the radio but mainly Bowie records.”
The music on HOME: A Nice Place To Visit offers listeners a profoundly immersive experience. “I’m really proud of the album,” Goldberg says. “I think I needed to step away from it for a bit to regain some perspective on it, which is always weird because now it’s truly like listening to somebody else… It’s not so much that I want to make music – I feel I have to, as if I have no choice.”
And so, he surrenders to his heart’s most urgent commands on the Goldberg Sisters’ HOME: A Nice Place To Visit, and for that, music fans can be thankful.