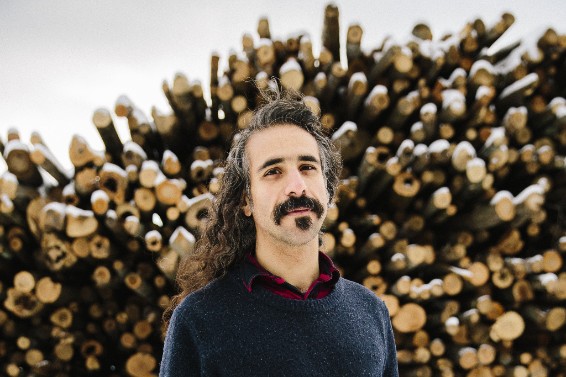 DUE OUT APRIL 20TH VIA EXPLODING IN SOUND RECORDS

Exploding In Sound Records is excited to introduce their latest signing, Yazan Fahmawiand his band, known simply as Yazan. Teaming up once again with Pile’s Kris Kuss(drums), Yazan’s latest album, Hahaha, is a diverse collection of the songs that speak to the human condition, songs that inspire change and thought, pulling from the most vulnerable and powerful reaches of his inner being. Due out on April 20th via Exploding In Sound, Yazan’s quest for peace, love, and forgiveness finds him and Kuss exploring elements of blues, folk, alternative rock, soul, and Sabbath-inspired metal, creating a sonic blueprint that’s ever shifting, tied together by the strength of his voice and his positive aura even in the darkest of times.

GoldFlakePaint are sharing first single “Cockroach,” which they called, “A wild and impassioned burst of sentiments, which, musically, sits somewhere between Pile at their swooning best and a dramatic David Bazan, but also finds space for outlandish dramatical flourishes and gnarly guitar solos, the new track from NYC’s Yazan is a fascinating spectacle; a brilliantly bold introduction to his new record, both when diving in deep for hidden meaning or simply admiring the value of its gleaming face.”

Speaking about the track, Yazan shared:

“While I was running my Brooklyn basement art space, we often encountered big, bold roaches that would skitter across the floor, or sit on walls and amps in plain sight. When one was discovered it caused a commotion that would only be resolved after one of us would stomp the critter out. Around this time I had a revelation about the value of life, and realized that while we are taught from a young age that cockroaches are pests, they are generally harmless and defenseless against us, and that although a crawling roach may instinctively cause a violent reaction in people, they have a right to live peacefully, especially considering that they cannot do us any direct harm. The shift in my perception about life allowed me to glimpse into the darkness that I carry in me, and that we as humans have the opportunity to cultivate life in all forms, as well the power to wipe it out. The choice to let a harmless (albeit annoying) creature live is also a choice to favor the light in our hearts over the dark tendencies we sometimes manifest as humans. This revelation has had a profound effect on me ever since, and I wrote this song to inspire those around me to be aware of the darkness that hides in us all us, and to consciously choose light and life over death and destruction.”

Yazan will be touring down to SXSW and back together with Bethlehem Steel and Washer, with a full US tour to follow in April and May. Biography:Although he has largely left behind his island birthplace in favor of the culturally vibrant alleys of Brooklyn, Yazan and his delusively grandiose ideals are certainly a product of his young life in a peaceful international community in Manhattan of the 1980s and early 90s. Born to a couple of Palestinian refugees who landed in New York in the 1970s, Yazan was raised among the clouds in a high-rise apartment towering over the East River. His summers spent visiting family in crowded Middle Eastern slums gave him an appreciation for his first-world privileges at a young age; sharply contrasting with the dominant culture of entitlement pervading his hometown, his sense of gratitude for peace and stability has deeply influenced Yazan’s art and values. He strives to create work that comforts those alienated and affected by imbalance, and he hopes to startle and inspire the complacent into action towards peace and justice. Even his deluxe worldly academic education failed to prepare him for introduction into the “real world”: day two of work at his first adult job at a multinational financial corporation was in New York’s financial district on Sept 11 2001, where he personally experienced the chaos and destruction of his generation’s greatest tragedy. Shaken by the events and the resulting outpouring of hatred and violence, Yazan has since committed to use his work as a platform for sustainable, humanistic values. His existence is the result of the violence and conflict he hopes to help quell through his expressions.

Yazan’s homegrown reputation has been steadily growing throughout Brooklyn, known for one the most dynamic and powerful voices in the city’s DIY scene. Yazan has been playing music for decades, but his focus changed while hosting and performing at late night juke joint jams in his now retired Williamsburg basement speakeasy, Shoulder Tap (aka The Tiger Lounge). Determined to let his creativity shine, Yazan’s passion for rock ’n’ roll, collaboration, the night life, community, and the ability to engage people in a meaningful way were pushed to the forefront. Known for his eclectic guitar styles, Yazan joined Pile for a US tour in 2015. Following the tour, Yazan and Pile drummer Kris Kuss released Howlin’, a ragged blues record that jammed hard and caught the attention of Stereogum, Spin, High Times, and more, as well as a new loyal following of fans. Capitalizing on the chemistry that developed between him and Kuss, Yazan returned to Allston, MA over the course of two years to record together with Kuss and producer Mark Fede (Fat History Month, Guerilla Toss). The resulting album, Hahaha, is nine songs shedding light on some of Yazan’s most vulnerable and darkest feelings. Written during times of personal hardships and growth, Hahaha is a Yazan record unlike anything you’ve heard before.

Seeking answers in face of his family’s disintegration, his honest, open messages communicate his cultivation of harmony. The songs tell his story so far, a weaving of love, loss, and forgiveness. Put on the charmingly sleazy “Do You Wanna Go?” and your body will be rocking before you know it. Heed him on the plaintive ballad “When I’m Gone” and you might feel like singing your own songs to help you get through your sorrows. In “The Star” he summons his rage, challenging you and himself both to take back ownership of our world from profit-driven purveyors of war and waste. Yazan sings to himself reminders how to live in light even through darkness, sharing his songs with you so that they might also be helpful to you someday.

Aspiga’s New Album “What Happened To You?” Out Now Via Paper + Plastick Records‏