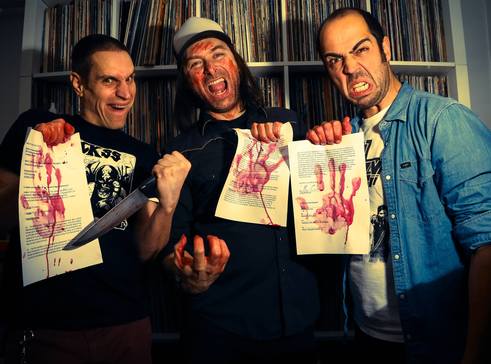 Vitamin X have been creating and touring their energetic brand of rock and thrash-soaked hardcore punk since the late 1990s, operating through die-hard DIY channels. The Amsterdam-based band has amassed an arsenal of albums, EPs, singles, splits, and more across a wide array of underground labels, including Havoc Records, Tankcrimes, Underestimated, AgiPunk, Refuse Records, and many others. Their two most recent albums were recorded by Steve Albini (Nirvana, Iggy Pop, Neurosis). Age Of Paranoia, the latest chapter in the band’s lineage, was recorded by Igor Wouters at ARC Studios in Amsterdam, and includes several special guest guitar solos by J. Mascis (Dinosaur Jr., Witch) and Bubba Dupree (Void, Soundgarden, Dave Grohl’s Probot, Brant Bjork).

On working with Southern Lord, Vitamin X comment “This will be our first release on a major/bigger label as we’ve always operated in the do-it-yourself scene, even though bigger labels were interested in us in the past. We feel Southern Lord really fits with us, and Greg Anderson is an amazing guy, who just like us, comes from a hardcore punk background but is also into all kinds of other styles of music.”

Greg Anderson adds, ”Vitamin X creates music that pushes boundaries within a genre that is typically limited, a really unique fusion of old-school hardcore and rock, metal, and punk.”

Well-known for their energetic and frenetic live shows which attract fans from across the metal, punk, and rock spectrums, Vitamin X has toured around the world several times, from Japan to the United States, from South America to Southeast Asia, and beyond. The band has played on MTV and many large festivals including Hellfest, Maryland Deathfest, and many others, and recently toured with Baroness and Harley Flannagan’s Cro-Mags. Vitamin X will be presenting their new songs for the first time at festivals and shows throughout 2018; check out some live dates below and expect further updates throughout the year.