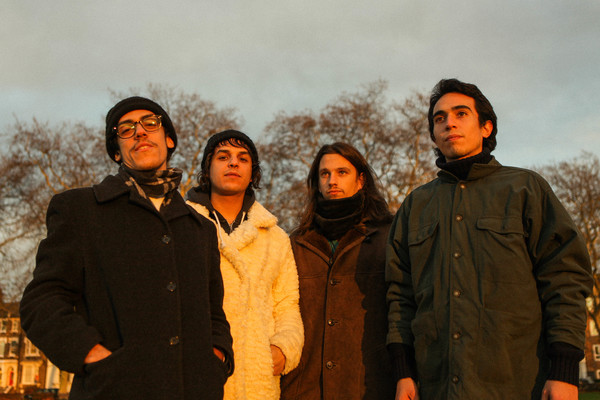 Catalonia/Chilean psychedelic, surf-rock quartet, The Zephyr Bones, have premiered a video today for their song “The Arrow Of Our Youth” – share via YouTube – starring the legendary, machete wielding Danny Trejo, on the eve of their first ever U.S. tour and a lengthy run at SXSW, as well as a slot at Primavera Sound in Barcelona and Focus Wales in Wrexham (see below).  “The Arrow Of Our Youth” is featured on The Zephyr Bones’ debut album, Secret Place, which arrived last fall on the Barcelona-based La Castanya.
Video director Éric Boadella stated, What if your soul can be transported to the first summer you fell in love? It’s inevitable to have romantic memories when listening to “The Arrow of Our Youth”, and this music video recreates that connection in a literal way; without metaphors, connecting the protagonists with the summer they had to leave behind their first love. Known around the globe for ‘Machete’, Danny Trejo has worked in more than 300 projects in his successful career but this video may be the first time he has played the lead in a romantic story.

The Zephyr Bones derived their name from the Zephyr surfboard shop in Santa Monica, CA and the Z-Boys skate crew. They emerged in 2015 with their debut EP, Wishes/Fishes, earning them a showcase at Barcelona’s famed Primavera Sound, where they return this June. The video for “Weird Summer” debuted via Noisey who called it, “hazy pop vibes like a hit of serotonin.” The band returned in 2016 with the “Black Lips/Surrounded By Sunflowers” 7” single, released in North America by the Other Music Recording Co. for Record Store Day. DIY magazine featured The Zephyr Bones in a story on the Spanish underground rock scene, alongside Hinds and Mourn.

A first single from Secret Place, “Juglar Child on the Carousel”, arrived last summer via CLASH who stated, “Slightly surreal and ultimately difficult to place, The Zephyr Bones seem to allow the music find its own path,” with the title-track single arrived in October via the Spanish site, MondoSonoro. The songs on Secret Place share something very intimate and invite the listener to travel to their own secret places, filled with dreams and promises, hidden away from the hectic world and these troubling times. Catch them live…