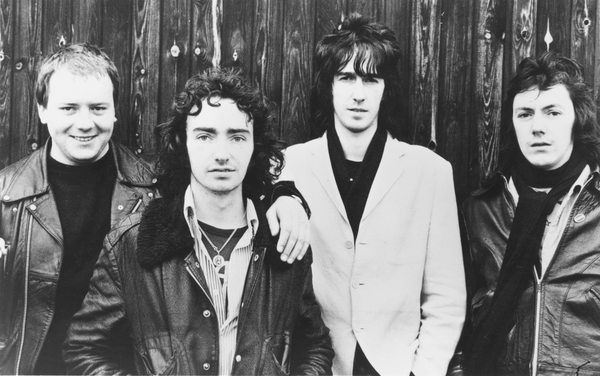 The Lurkers were the first ever band on Beggars Banquet, and the whole label history boils down to their existence. Formed in West London in 1976, they are one of the most notable bands of early UK punk and within eighteen months the band had 5 UK top 75 chart singles with appearances on Top of The Pops.
Fulham Fallout was their debut album and this release celebrates the 40th anniversary of it’s release. Pressed on orange vinyl, the 14 tracks on this album have been noted over the years as being punk classics, and Henry Rollins called this album one of his 20 favorite punk albums ever.
The Lurkers had no schtick, no frills. They were inspired by the Ramones and the New York Dolls, the British beat boom of the ‘60s and Glam Rock band like Slade and Sweet. While the other bands embracing punk at the time were flaunting their sound with typically “punk” safety pins and spiky hair, The Lurkers had unfashionably long hair and even, on occasion, wore white suits.
“The album is an astonishing accomplishment, a blur of high octane riffs and unforgettable hooks tumbling over one another without a care for manners or niceties.” - ALLMUSIC
“Perfect in every way. Pure energy, great songs. Punk Rock’n’Roll.” - LOUDER THAN WAR
“their ’78 debut remains one of the era’s premiere platters and it even left the band within gobbing distance of the mainstream” – RECORD COLLECTOR
More info about Record Store Day here:
https://recordstoreday.co.uk