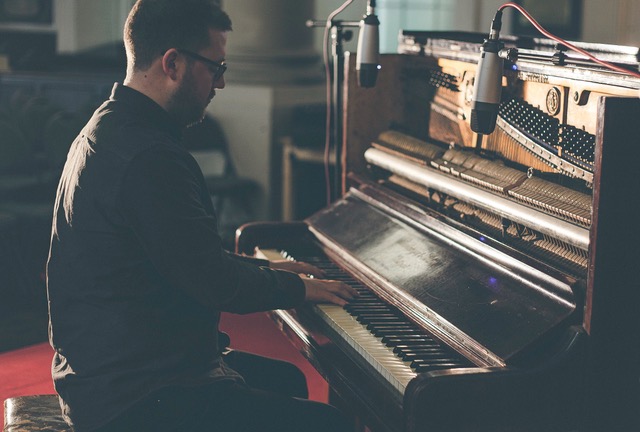 A professional musician and teacher based in Leeds, Walker began to write and record his own instrumental music as several other projects and bands he was involved with began to slow down or take a break. After tentatively releasing them on Soundcloud, the music quickly received a warm reception and Walker was embraced into a community of composers and fans alike with his music coming to the attention of Nils Frahm who included two tracks in his piano day playlists in 2016 and 2017 respectively.

Comprised of nine thoughtfully composed and beautifully performed songs written and recorded in Walker’s living room in Bramley, Leeds, ‘Mono’ opens with the tumbling and tense ‘Turn’ and then travels through each composition with every performance accompanied by an orchestra of creaks, fumbles and organic noises from the piano, Walker’s home and the outside world, leaving the listener feeling like they are sat right there with him in his front room.
The artwork for ‘Mono’ was created by acclaimed American artist Gregory Euclide, the artist behind the cover of Bon Iver’s Grammy award winning self-titled second record. This collaboration came after Euclide discovered Simeon’s music online and becoming a fan after Simeon’s compositions became the soundtrack to his work. Upon discovering they were fans of each other’s work, collaboration was an obvious next step.
Alongside this new live session Simeon has also shared details of an EU headline tour alongside an event at Leeds’ Brudenell Social Club for Piano Day 2018. Organised in conjunction with the Brudenell and Leeds’ High & Lonesome Festival, Walker will be hosting a free entry show at the revered venue on Piano Day featuring performances from himself, Tamzene and Leaf Label signings Night Ports.