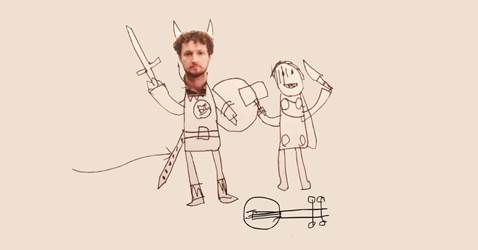 Following last year’s release of his acclaimed sixth album, The Following Mountain, experimental folk artist, singer, and multi-instrumentalist Sam Amidon will tour the UK in October.  The tour includes performances in Birmingham, Brighton, Bristol, Manchester, Leeds, Edinburgh, Sheffield and Newcastle, in addition to previously announced festival appearances in the UK and elsewhere in Europe this summer.  Tickets for the October dates go on sale on March 23 at 10am.  See below for details.

Nonesuch Records released The Following Mountain in 2017.  Created with producer Leo Abrahams (Brian Eno, Regina Spektor) and Amidon’s frequent collaborator Shahzad Ismaily, it represents a new approach for Amidon, who shifts from his previous norm of re-working traditional folk songs and presents nine wholly original compositions, with some lyrics drawing on traditional sources.  The album includes the singles ‘Juma Mountain’ and ‘Warren’, as well as a rare guest appearance by drummer Milford Graves, known initially for his work in the 1960s with free jazz legends Albert Ayler and Sonny Sharrock.  Rating it one of their albums of the year, Uncut wrote, ‘Amidon’s first album of original songs feels like a liberation.  He’s still steeped in the argot of weird Appalachia, but there is a loose, improvisational sensibility to these performances.’  TheGuardian described it as ‘Deeply rewarding, gritty, personal new paths in folk.’  While fRoots proclaimed,‘Amidon shows that he isn’t a restless or purposeless innovator.  His music feels both conscious and free.  A beauty.’

The Following Mountain follows Lily-O, Amidon’s 2014 Nonesuch Records collaboration with guitarist Bill Frisell, about which the Guardian wrote ‘A compellingly quiet, intense affair that is remarkable both for the power of Amidon’s understated, no-nonsense and often mournful vocals, and for the subtle arrangements that bring an urgency to his mostly traditional American songs and hymns.  Subtle and intriguing.’