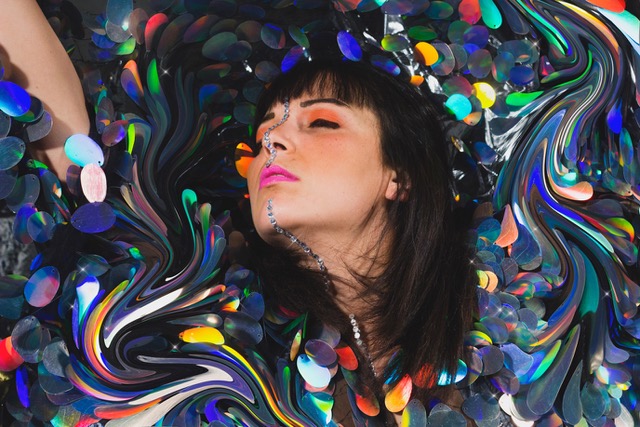 “Really unnerving in the best way.”
The Fader

S a r a s a r a, the mesmeric and mystifying Parisian electronic artist and producer, has revealed her brand-new video for ‘Love’, directed by Nikolai Galitzine, and announced that she will be appearing at SXSW in Austin this March, as well as performing at NYC’s Mercury Lounge.

The original track, taken from her recently released debut album Amor Fati, is a slick and beguiling work, while the intriguing video takes the track to new heights.

Talking about the video, s a r a s a r a said: “Nikolai is a filmmaker and special effects artist who worked in Hollywood on big productions for several years. We have the same tastes in films. We had so much energy to share when we started our collaboration, we spent days writing and drawing a lot of different and complicated things together. It turned out it wasn’t meant to be that way.

“Naturally, we ended up doing something very simple for this video, playing with light and the colour red. Symbols of energy, blood, love, connection, relationships, the only things that keep you alive. Just like the theme of this song, simple, primal and universal and temporary.

Already a boundary pushing artist, s a r a s a r a’s music is as experimental as it is versatile, taking in elements of industrial electronica, trip-hop, r’n’b, breaks and more.

Graced with an enchanting voice, s a r a s a r a has cultivated a precise and startlingly individual sound and aesthetic. Her infatuation with electronic music began as a teenager, with stints as a DJ influencing her ear for the intricate and expansive music she now creates.

SARASARA SHARES NEW TRACK AND VIDEO; ‘INTO ME SEE’ FROM SECOND ALBUM ORGONE OUT JULY 5TH ON ONE LITTLE INDIAN RECORDS