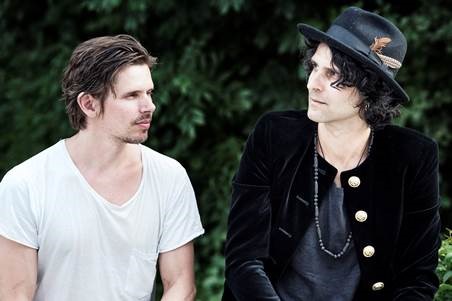 CURVS
New album ‘Hauntropics’
out now via Fysisk Format
Listen to new single ‘Khyper Pass, Pt. 1’
Norwegian synth-rockers ‘Curvs’ show their fantastic ability to create eerie yet compelling music with their up-coming debut album ‘Hauntropics’ has been released via Fysisk Format. Inspired by stays in the tropics and the inclination to corrupt musical genres, ‘Hauntropics’ was born out of homemade compressors, rare pre amps and echo valves coupled with old drum machines, odd strings and analogue synths from Japan.
Childhood friends Hjalmar Myksvoll-Singh and Øystein Redalen own their own studio, converted from a potato cellar in Norway. Free rein during recording and inspiration from a multitude of genres ranging from krautrock to electropop has given Hauntropics its rich, psychedelic and indefinite sound.
Infused with driving guitar riffs and pumping bass synths, this record treats its listener to progressive electronic music reminiscent of French house artists like Kavinsky one minute, and propulsive Nirvana-esque punk the next. Their masterful production allows this record to flow naturally and enables the listener to share in their vision.
Lead single ‘Bamboo Town’ intrigues with glitchy, delayed drums and devilish guitar and bass parts. Along with the mysterious, atmospheric sound effects sewn into the track, the unrelenting bass and spectral, haunting production give this track a Mini Mansions-like quality.
Hjalmar and Øystein were almost entirely responsible for the recording and production of the album with mixing support from Nick Terry (The Libertines, Klaxons). They are joined live by Casiokids drummer Joachim Amundsen Trana and bassist Lasse Saurbrey.
http://www.curvsmusic.com/
https://soundcloud.com/curvs
https://www.facebook.com/curvs.home/

THE SOFT MOON shares new video “Give Something”! Album ‘Criminal’ out now via Sacred Bones Records