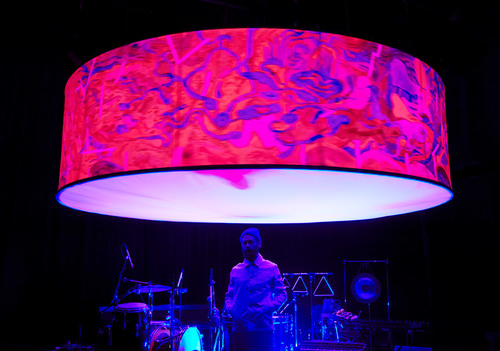 Mind Over Mirrors
Shares New Rhythmic Drone Composition “Vermillion Pink”
Listen and share here:
https://youtu.be/_XKigzxtaWs
Bellowing Sun Is Out 6 April on Paradise of Bachelors
Performance Premiere of Bellowing Sun Debuts 6 April at Museum Of Contemporary Art Chicago
“Bellowing Sun manages to touch on fascinating iterations of drone music, presenting a wildly diverse landscape of tracks that are both individualistic and work in lock-step to present a cohesive whole.” – Noisey
“In composing Bellowing Sun, Fennelly focused on rhythm more than ever. On “Matchstick Grip” that tactic pays continual dividends, injecting blood into his oxygen-rich music.” – NPR Music on “Matchstick Grip”
“An atmospheric groove that somehow sounds both intergalactic and medieval. Pulsating strings, shifting drum beats, and a harmonium play about the synth soundscape. The song beams and flickers, inspired by the growing impact of artificial light on living beings.” – Stereogum on “Zeitgebers”
Mind Over Mirrors, led by Chicago based syntheist, harmoniumist, and composer Jaime Fennelly, has shared “Vermillion Pink,” a new track that offers a dark, devotional take on the rhythmic drone music perfected on the upcoming double-album Bellowing Sun. Synthesizers flicker and gleam across the aural plane as seething violin, courtesy of Jim Becker (Califone, Iron & Wine), creates a brooding undercurrent onto which percussionists Jon Mueller and Janet Bean (Freakwater) carve out a hypnotic groove.
The track was premiered on Noisey along with an in-depth interview with Fennelly, writing, “This, perhaps, is the crowning triumph of Bellowing Sun: Its ability to spring naturally from a source, presented as music that’s existed forever, previously untapped before Fennelly awoke it from a slumber. It feels both massive and intimate, a hulking presence yet easily digestible…Bellowing Sun is merely a part of a larger vision. But the music—this current iteration of Mind Over Mirrors’ constantly evolving vision—is so powerful, so alive, that it carries a meaning all its own.”
Bellowing Sun is out 6 April on Paradise of Bachelors.
Fennelly says, “Compositional tools can exist in a myriad of forms, including the tone & timbre of a piece of music gear.  In Bellowing Sun (as well as my previous album, Undying Color) I’ve been running my harmonium through a particular rhythmic filter (a 90’s Lovetone Ring Stinger – which also happens to have a strikingly pink paint job), which creates unique animations of sound for an instrument that otherwise is very much known to fulfill static and supportive droning duties. My own approach to my work, and particularly within instrumental pieces, is to imagine sound as theater, where instruments (and their players) can assume dramatic transformative roles. A narrative score of ‘Vermillion Pink’ may read as, ‘the synesthetic color-sound of a lost vessel at sea or even outer-space, as solar winds and breakers advance and pound in the darkness. Humanity clings on in desperation and eventual resolution as the twinkling of the red-flare shrouded shores (referencing the preceding track of the album “Lantern on the Beach”) of distant planets slip farther away.’ Through such a description and electronic programming, the breathy harmonium, for example, undergoes a metamorphosis into a great storming surf.”
As Fennelly was writing the music that comprises Bellowing Sun, he was also designing and building a magnificent zoetrope, covered in abstracted images of the natural world, which appears on the cover of the album. This spinning light sculpture will be the centerpiece of the live production of Bellowing Sun, which will debut on 6 April at the Museum of Contemporary Art Chicago, with an encore performance on 7 April.Both performances are on the verge of selling out. The zoetrope was created in collaboration with visual artists Timothy Breen, Eliot Irwin, and lighting designer Keith Parham. The production was commissioned by the MCA.
Mind Over Mirrors – “Matchstick Grip”: https://youtu.be/ZgBi0Oh5yL0
Mind over Mirrors – “Zeitgebers”: https://youtu.be/OS3u69CLOy8
Pre-order Bellowing Sun from Paradise of Bachelors (2xLP/CD): http://www.paradiseofbachelors.com/pob-040
Pre-order Bellowing Sun from other stores (2xLP/CD/DL/stream):
http://smarturl.it/PoB40
Tickets to the production of Bellowing Sun April 6th and 7th are available via MCA Chicago:
https://mcachicago.org/Calendar/2018/04/Mind-Over-Mirrors-Bellowing-Sun