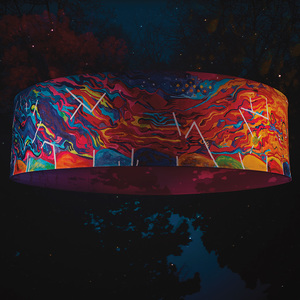 Mind Over Mirrors
Shares Interview Video Detailing Bellowing Sun Live Premiere Production
Third show added to live performance at Museum of Contemporary Art Chicago – 6-7 April 2018
Bellowing Sun Is Out 6 April on Paradise of Bachelors
“In composing Bellowing Sun, Fennelly focused on rhythm more than ever. On “Matchstick Grip” that tactic pays continual dividends, injecting blood into his oxygen-rich music.” – NPR Music on “Matchstick Grip”
“An atmospheric groove that somehow sounds both intergalactic and medieval. Pulsating strings, shifting drum beats, and a harmonium play about the synth soundscape. The song beams and flickers, inspired by the growing impact of artificial light on living beings.” – Stereogum on “Zeitgebers”
““Bellowing Sun manages to touch on fascinating iterations of drone music, presenting a wildly diverse landscape of tracks that are both individualistic and work in lock-step to present a cohesive whole.” – Noisey
Bellowing Sun by Mind Over Mirrors is a massive work that spans several mediums. Mastermind Jaime Fennelly conceived the piece simultaneously as an album and live performance, which includes an impressive light sculpture, a zoetrope that spins above the group as they perform. Fennelly describes his creative process in a new video interview produced by the Museum of Contemporary Art Chicago, who commissioned the production, and shared by the Chicago Reader. The video, shot during rehearsals at the museum in 2017, features incredible footage of the ensemble performing beneath the zoetrope as it will be experienced during the premiere.
Mind Over Mirrors will present the live premiere of Bellowing Sun at the MCA Chicago on 6 and 7 April at 7.30pm CST. The initial run of two performances have sold out, and a third performance has been added later on 6 April, at 10pm CST. Tickets are available HERE.
Mind Over Mirrors, the quartet of Jaime Fennelly, percussionist and vocalist Janet Bean (Eleventh Dream Day, Freakwater), violinist Jim Becker (Califone), and percussionist Jon Mueller, will playBellowing Sun in its entirety at each performance. Bellowing Sun will be released as a 2LP, CD, and digital album by Paradise of Bachelors 6 April.
Singles From Bellowing Sun:
Mind Over Mirrors – “Vermillion Pink”: https://youtu.be/_XKigzxtaWs
Mind Over Mirrors – “Matchstick Grip”: https://youtu.be/ZgBi0Oh5yL0
Mind over Mirrors – “Zeitgebers”: https://youtu.be/OS3u69CLOy8
Pre-order Bellowing Sun from Paradise of Bachelors (2xLP/CD): http://www.paradiseofbachelors.com/pob-040
Pre-order Bellowing Sun from other stores (2xLP/CD/DL/stream):
http://smarturl.it/PoB40