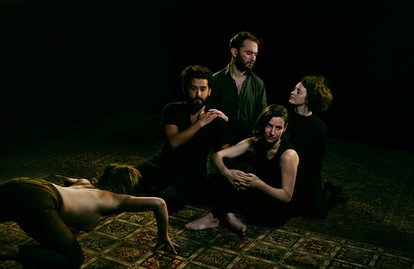 Mesadorm
‘Easy’
New single out now via Babylegs Records
Formed in Bristol in 2015 by five longstanding friends, Mesadorm is the new collaborative project of Blythe Pepino formerly of London Art Pop trio, Vaults. Each member of Mesadorm is a high calibre performer and writer, bringing an array of musical concepts and timbres to the emotional landscape of Pepino’s lyrics.
After a few years testing the mainstream stage with a major record deal Pepino has moved back to her roots as a leftfield rock and electronica songwriter. As well as drawing influence from contemporary electronic passions like Caribou, Grizzly Bear and Sylvan Esso, Pepino also draws from late 60s and early 70s folk and popular music such as the song-smithery of Carole King, Neil Young and Joni Mitchell. The song content for ‘Heterogaster’ is based around ideas of family, sex, trust and disconnection, using rich vocal harmonies, beautifully layered to musically represent these issues.
New single ‘Easy’ is taken from Mesadorm’s forthcoming album ‘Heterogaster’, released 11th May via Babylegs Records. The song is an emotive piano-led ballad, with tender, stripped-back verses and increasingly rousing, gospel-style choruses.  It narrates the perspective of a child as they experience aggression and negativity. The point of view changes each verse as the child becomes adolescent and then adult. The song features vocals from three generations of lead singer Blythe Pepino’s family, recorded at her grandmother’s house.
Mesadorm are; Blythe Pepino (Vox/Keys), Aaron Zahl (Guitars/Production), Daisy Palmer (Drums/Bvs), David Johnston (Bass/Bvs), Jo Silverston (Cello/Bvs).
https://www.babylegsrecords.com/