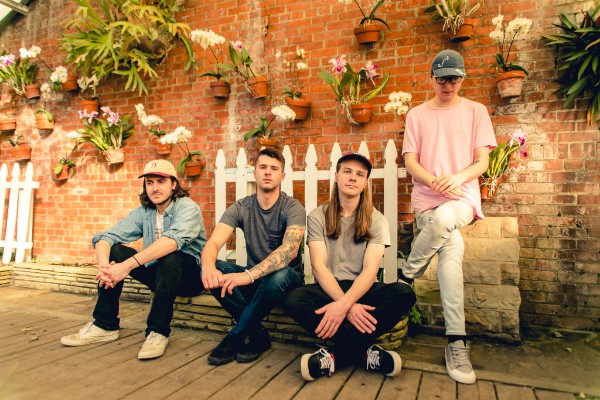 Ohio’s McCafferty are now premiering their new song “Strain” via Alternative Press. The song can be heard alongside an interview where singer Nick Hartkop talks about making the decision to make the switch from his stable job as a special education teacher to follow his passion and pursue music full time. “Strain” comes off of McCafferty’s new album Yarn, set to be released on March 23rd on Triple Crown Records. Pre-orders for Yarn are available now via Triple Crown Records. You can also hear the band’s first single “Loser.” now on Spotify, Apple Music, and across all digital platforms.
Listen to McCafferty’s new song “Strain” and read an interview with the band now via Alternative Press.

No matter how far they might stray, McCafferty always seem to find their way back.

Four years ago, just as the Ohio-based quartet—singer/guitarist Nick Hartkop, guitarist Evan Graham, bassist Chris Joecken and drummer Wes Easterly—were building steam with their sweat-soaked, highly caffeinated blend of emo and punk, they abruptly put their musical aspirations on pause. But even though McCafferty disappeared, they ultimately lived on through their songs.

“I had to keep taking the music down off the internet,” says Hartkop, who formed McCafferty as a solo acoustic project in 2010 and became a special education teacher during the band’s hiatus. “My students were asking me, ‘What’s this song about?’ It just didn’t fit with my professional life. But the band really started to grow when it was broken up. So many people have come up to me and told me they discovered us when we weren’t a band. I don’t know how it happened.”

One listen to Yarn, the band’s second LP and debut release for Triple Crown Records, and it’s pretty clear: McCafferty’s music does more than just entertain with its raucous energy and infectious melodies—it challenges listeners by exploring the ugliness of the world at large and lends a comforting hand to those with nowhere else to turn.

It’s that connection with their audience that’s actually responsible for McCafferty’s second act in the first place. At the urging of a fan, a crowd-funded campaign allowed the band to record and release their comeback EP, 2017’s Thanks. Sure. Sorry., which reintroduced the scene to McCafferty after their hiatus and earned the band recognition in outlets like Alternative Press. Now, with a new fire and full-time mentality (before reuniting, the band had played a whopping six shows ever), they’ve stretched themselves further than ever on Yarn.

Produced by Mike Sapone (Taking Back Sunday, Sorority Noise), Yarn is an emotional bottle rocket set to blow: songs of failure, fear and fatigue that mine difficult emotions and weighty subject and put them on display with little hesitance or second-guessing. From “Westboro Sadness,” written in response to the Steubenville football rapes, to tales of death, divorce and more, the album is an oft-uncomfortable—yet deeply important—companion for these troubled times.

“I’m a massive Stephen King fan,” Hartkop explains. “He said in order to get this sense of horror across, you have to make your reader uncomfortable—but you have to do it with purpose. If you just do it for the sake of making someone uncomfortable, that’s just you being an asshole. If I were writing lyrics with shock value in mind, the art would be worthless. Sometimes the world, especially the time we live in today, can be jarring and a little scary. If you censor yourself, you’re not being honest to your art.”

That honesty is ultimately what has endeared McCafferty to their hyper-devoted audience, the one who kept them alive during the dormant years and pushed them to find their voice again. Above all, it’s proof of just how much the music means to their fans—and, for that matter, to the band themselves.

“One of the definitions of ‘yarn’ is a long, rambling story that is incoherent and just sort of goes on,” Hartkop explains. “I think that really defines McCafferty. No matter how many times we tried to put it down, it’s come back up. The band wasn’t done with us. It was calling us back for a reason.”