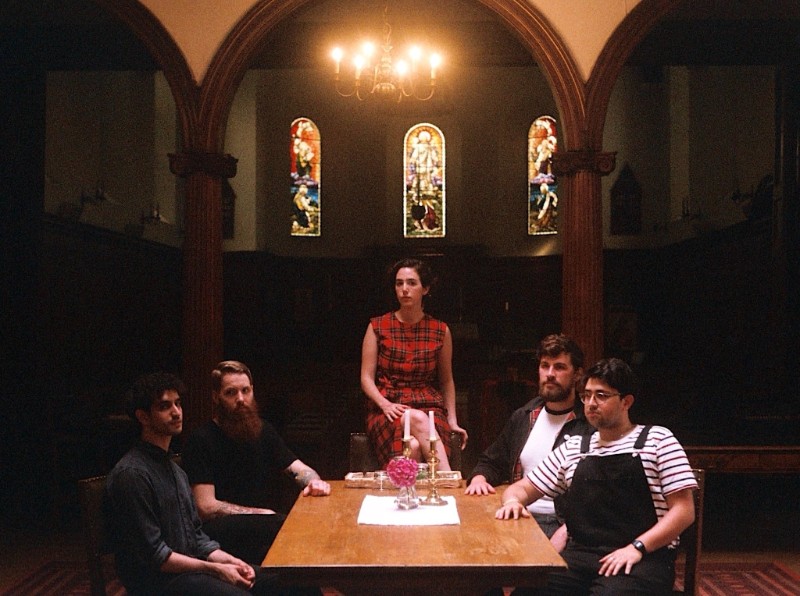 “Oldsmobile is their first single and it’s a bright blue marble of a track that, if you’re into filing, would slip between the folk-pop and experimental aisles”
Dummy

“…another blast of wry, inventive, off kilter songwriting”
Clash

Angular art-rock quintet Post Louis have returned with their magnificent new single Little Jack and announced two London shows at Stour Space (6 March) and Paper Dress Vintage (27 April).
The infectious experimental-indie track studies the personality of a mysterious figure, mixing loneliness, pornographic fantasies and portents of disaster (“She says you’re gonna be a wolf someday / You won’t believe it till it’s happening”). Discussing the song, lead singer Stephanie Davin commented:
“Little Jack is a character study of someone who lives mainly in their own head. It’s about the pains of loneliness and low confidence, and what happens when these mix with naïve sexual desire. I wanted to hint at the potential for harm or even domination.

“Little Jack isn’t a monster, but the song is in part about how monsters – or wolves – are made. We need to rethink how we make, force and mould some children into being ‘men’.”

Post Louis emerged in 2013, releasing two EPs and a standalone single to immense critical acclaim, praised by the likes of Pitchfork, Clash, Dummy, Rolling Stone, LOBF, Quietus, DIY. The band then withdrew to write and record.

Songwriters Stephanie Davin and Robbie Stern (Cajun Dance Party, guitar with Fryars) retreated to a remote cottage in Wales during the winter, armed only with a looper and a Dictaphone.

They took the material that surfaced from their time away to the rest of the band (Mattis Moviken, Andy Stern, Adam Turner-Heffer) and formed brand new songs through meticulous playing, testing, deconstructing and experimenting at the Norwegian Church (Sjømannskirken) in South London where the band rehearsed.

The result was a collection of songs that are complex and interweaving, and like nothing the quintet had ever created before. Self-produced, the tracks are carefully composed to expose the playing styles and personalities of each band member.

As the music, and the process of creating it, became more personal and vulnerable, so the songs have started to address darker and messier themes. The previously released EPs were preoccupied with the ways in which people can damage one other – the small-scale methods by which individuals can be cruel, sometimes without realising. Post Louis’ new writing extends this gaze, taking in questions about love, labour, effort and blame. The vocals are bolder, fluttering between vulnerability and anger.

This is a slow-burn, collective project built on intimacy, trust and patience. Robbie and Andy are brothers. Stephanie’s brother helps to produce their music. The beautiful, cavernous Norwegian church building has been home for both Mattis and Adam, as well as a second home and studio space for the whole band, and can be seen in the group’s recent press shots.