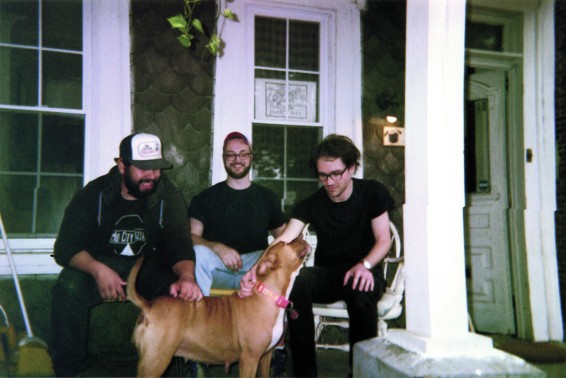 “UNIVERSAL CARE” OUT NOW ON EXPLODING IN SOUND RECORDS

“It’s always satisfying when a band makes the leap from great to even-greater, and Kal Marks do that with their latest album.” – Stereogum

“It’s realist rock of the first order that acknowledges the terrors of the world but recognizing the necessity of slogging onward.” – Noisey

“There’s always been a wild edge to the music of Kal Marks, a kind of unspoken recklessness that goes hand-in-hand with the music itself” – GoldFlakePaint

Kal Marks are sharing their new video, “Loosed,” from the recently released Universal Care,  with Uproxx. Eager to hit the road for a full US tour, the band’s video, directed by Ethan Long, is weird and mysterious, and full of spooky masks. Speaking about the video, Uproxx shared:

“A perfect visual summation of a song that moves flawlessly from place to place.”

Kal Marks will bring Universal Care to a town near you this Spring, with dates kicking off this month and a full US tour to follow in April and May. All dates can be found below. In addition to their upcoming tour, the band are in desperate need of a new van and have launched an Indiegogo campaign to help fund their new ride. Nearly half way to their goal, the band are offering everything from records and shirts to personal guitar, bass, and drum lessons, and the power to change the band’s name! It’s worth checking out just for the promo video alone.

Universal Care is about asking questions and seeking answers during a tumultuous time for the band and the world. The future of the band was unclear following their last album, and Universal Care is a response to those strange and uncertain times. Recorded at Boston’s Mad Oak Studios with Miranda Serra G and mastered by James Plotkin (Old Man Gloom, Windhand, Thou), it’s a heavy record that spans the spectrum of Kal Marks’ dynamic sound from hazy folk to blistering noise rock, a reflection of Carl Shane’s(guitar/vocals) spirit and emotions. The album is a reaction to the death of a close friend, but it’s also a reflection of the seriously dark times in our country. The band are baring their souls and taking chances, creating their most compelling album in the process. Universal Care is cathartic. Kal Marks’ are finding a release… a crushing, beautiful, absorbing release, an exploration of spirit and emotion in the hardest of times. Their latest LP, Universal Care, due out February 23rd via Exploding In Sound Records, finds the Boston trio at their most dynamic, seeping with vivid colors and sonic experimentation. It’s a new approach for the band, one that began on shaky ground, an uncertainty that lead the band to create an album both brilliant and challenging. Universal Care is restless, drawing on personal hardship and these tumultuous times, taking life as it comes. The trio of Carl Shane (guitar, vocals), Michael Geacone (bass) and Alex Audette (drums), have created a record full of sonic risks and rewards, thick textures, skin crawling sludge, and hazy pop. Through unexpected twists and turns, the band capture a range of honest emotions and struggles without boundaries. Crushing distortion, atmospheric drifts, shifting rhythms, and warm acoustics all swirl together in unison. There’s a freedom in their agitation. A welcoming catharsis.

Formed as a solo project over a decade ago, the band has been evolving ever since, weathering the darkness with a sense of humor and one of Boston’s most explosive live shows. Having released two critically praised albums, Life Is Murder (2013) and Life Is Alright, Everybody Dies (2015), Universal Care is a step forward, a brilliant new record that finds the band darting between their most accessible and chaotic moments with natural grace and fury. They’ve spent the past six years playing throughout the country, decimating one audience at a time, sharing the stage with everyone from Big Business, True Widow, and Pile to And The Kids and Florist.