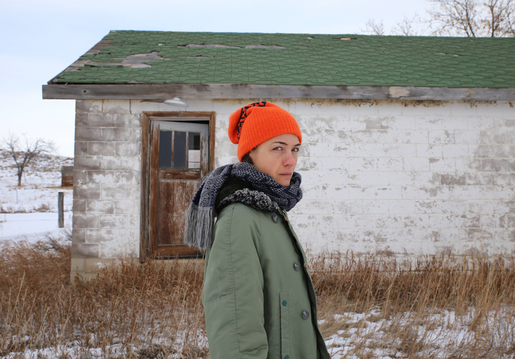 Not long after recording her tenth album, Ruins, Liz Harris traveled to Wyoming to work on art and record music. She found herself drawn towards the pairing of skeletal piano phrasing with spare, rich bursts of vocal harmony. A series of stark songs emerged, minimal and vulnerable, woven with emotive silences. Inspired by “the idea that something is missing or cold,” the pieces float and fade like vignettes, implying as much as they reveal. She describes them as “small texts hanging in space,” impressions of mortality, melody, and the unseen – fleeting beauty, interrupted.

Grid Of Points stands as a concise and potently poetic addition to the Grouper catalog.

“Grid Of Points is a set of songs for piano and voice. I wrote these songs over a week and a half; they stopped abruptly when I was interrupted by a high fever. Though brief, it is complete. The intimacy and abbreviation of this music allude to an essence that the songs lyrics speak more directly of. The space left after matter has departed, a stage after the characters have gone, the hollow of some central column, missing.” – Liz Harris

(cover art)
Track Listing:
1. The Races
2. Parking Lot
3. Driving
4. Thanksgiving Song
5. Birthday Song
6. Blouse
7. Breathing
8. Coal Train
2018 Live dates:
20/4 – Berlin, Hebbel Am Ufer
25/4 – Helsinki, Temppeliaukio Church
27/4 – Krems, Donau Festival
28/4 – Budapest, Trafo House of Contemporary Arts
1/5 – Rotterdam, Arminiuskerk
3/5 – Brugge, Magdalenakerk
5/5 – Dublin, Unitarian Church (2 shows)
11-13/5 – Arcosanti, FORM
20-24/5 – Calgary, Sled Island
press quotes for previous album Ruins:
“Ruins is one of her finest works, full to the brim with emotion in spite of the aching space at its heart.” – FACT MAGAZINE
“Harris deploys silence and sound artfully and masterfully throughout. And the closer you listen, the more intimate it becomes.” – THE QUIETUS
“Here she foreswears the looping pedals and the innumerable layers of fuzz, and what we’re left with is achingly beautiful.” – PITCHFORK
“‘Ruins’ is radical in its closeness.” – CLASH
“It’s an almost-pitch-perfect progression of eight tracks across 39 minutes.“ – THE WIRE
“A supremely melancholy late-night hymn to lost love.” – DROWNED IN SOUND
“It is rare to experience such a direct, unfiltered, and fearless emotional connection from a mere recording, especially one from an artist who has previously been so well-cloaked in a fog of effects.” – BRAINWASHED
“Utterly sublime.” – BOOMKAT