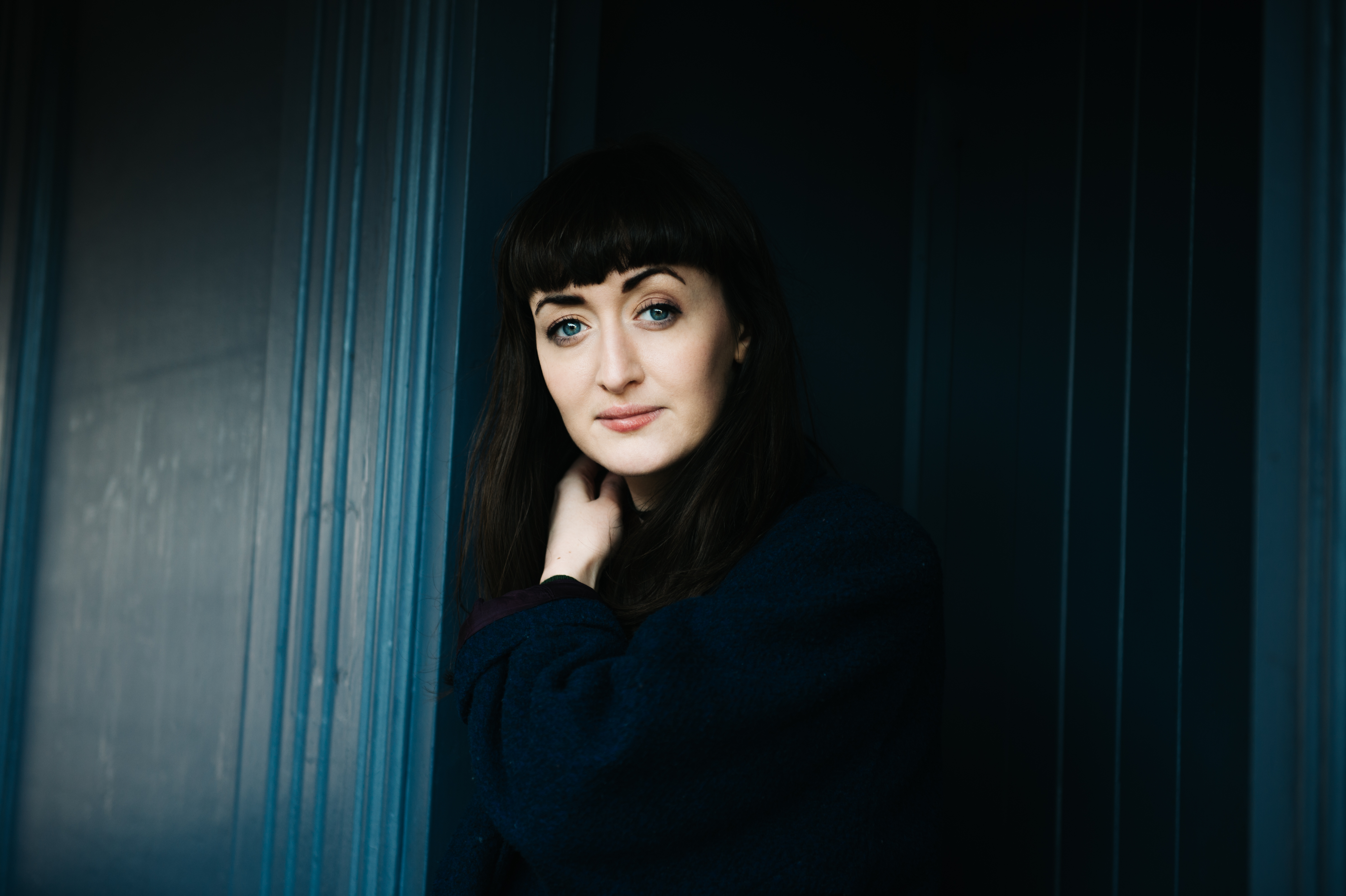 Back in 2016 we first introduced you to the sublime sounds from such a unique artist, Irish songstress Maria Kelly. Growing up in Mayo, Ireland, Maria spent many years developing her sound into a delicate blend of atmospheric-alt-folk.

With some incredible singles under her belt, 2018 is the year of her forthcoming double a side single release. Critically acclaimed Irish artist Maria Kelly tackles mental health head on with the release of her AA-side single Dark Places / Small Talk, out on 27th April 2018 via Veta Records. Both singles are drawn from Maria’s own experiences of social anxiety and depression, as well as multiple conversations with others who had similar stories to tell.

Ahead of this release and another remarkable milestone for this artist, Gavin Brown got to spend some time chatting to Maria a few weeks ago to find out more about Maria’s influences, her previous single Threads, future plans and more…

Q- Who or what were your formative influences as a singer?

I grew up listening to artists like Dido, the Corrs, Fleetwood Mac. When I first got a computer, I was really inspired by DIY Youtube songwriters, like Kina Grannis, Kate McGill and Orla Gartland. And then I discovered artists like Regina Spektor & Lucy Rose, who both opened up lyric writing for me.

Q- Your new single Threads is out now and is a sublime piece of haunting melody. Can you tell us a bit about the recording of the song and what it’s about?

‘Threads’ is a co-write with Ailbhe Reddy, and came about after a co-headline tour in May 2017. We had played together a lot, and would regularly share music with each other. We were also influenced by a lot of similar artists so we decided to try creating something together.

We both had unused lyric ideas that had never made it into a full song. I had the first two lines from a notebook I had when I was about 16, and it dealt with the idea of experiencing a half-committed relationship – being with someone who was never comfortable enough to settle. Ailbhe had similar unused themes and we just continued with this idea of having one foot out the door, and how heartbreaking that can be to experience.

Q- You regularly work alongside Matt Harris from the brilliant HAWK, how did you hook up with him?

Matt and I met in Galway a couple of years ago where I supported HAWK on their Irish tour date. We started sending tracks back and forth and I just loved the way he could bring my songs to life. He’s an incredibly talented producer, with an amazing ear for arrangement. It was just a really good fit.

Q- Will you work together again in the future?

For sure. I’m currently releasing through his label Veta Records and we have a couple of cool things planned for the coming year.

Q- Have you got any plans to release an album or EP in the new year?

Yes! Quite an exciting physical release in April of this year, which I won’t say too much about yet. After that, I’ll be beginning to write an album for most of the summer, I’m quite excited to dedicate a few months to that.

Q- How did your run of shows in Ireland and London in November go?

They were amazing. I’ve been playing to kinder and kinder crowds and people really seem to be enjoying what I’m making, which is always an encouraging thing. The London shows were great, it’s always cool to get to play in bigger places a little further away from home.

Q- What about your appearance at the Other Voices festival, how was that experience?

One of my favourites of the year. The whole weekend was such a dream, from actually winning the Open Call, to getting to go and spend a week in Dingle. We were treated so kindly..yeah, just an all around dreeeam!

Q- What is the musical climate like in Ireland at the moment?

I think the climate in Ireland is incredibly healthy. There’s a real close-knit community of musicians here and a general vibe where everyone wants to see each other do well. It’s a really supportive and encouraging environment to work in. And it’s diverse – the best thing about it is that it feels like there is room for every type of music.

Q- Are there sent venues/record shops/labels you could recommend to us?

Q- Who are some up and coming artists that you could recommend to us?

Q- What has been the best gig you have played so far?

I’m still on such a high from the start of this month at Imagining Ireland: 21st Century Song. I got the chance to play my songs with a string quartet in the National Concert Hall in Dublin and that was just insane. To be on the bill alongside artists like Paul Noonan, Lisa Hannigan, Saint Sister – it was just very surreal.

Q- What was the best gig you saw last year?

Bitch Falcon at Hard Working Class Heroes was pretty special. The venue was jammed and it was SWEATY.

Q- What was the first gig you ever went to?

I think my first gig was Paolo Nutini in the TF Theatre in Mayo. It was while he was touring ‘These Streets’, I loved that album. I remember Heathers, an Irish duo supported them and I remember feeling so captivated by the whole thing.

Q- You’ve supported the likes of KT Tunstall, Billie Marten and James Vincent McMorrow at live shows. How was it playing with these artists and did you have a particular favourite?

Just incredible really. It’s a crazy feeling getting to support artists who I’ve listened to and looked up to for years. I think KT was a really important gig for me, just as I had listened to her albums on repeat when I was younger. I still know all the words to ‘Drastic Fantastic’ haha. Meeting her felt a bit like ‘wow..I’m no longer playing songs in my shit lil’ bedroom’ ha!

Q- Who would you love to play a show with in the future?

It would be a total dream to play with Gabrielle Aplin or Lucy Rose. I admire their songwriting abilities so much and they both put on incredible, intimate shows. I’d love to get inside their heads!

Q- Have you got any gigs coming up?

(AT TIME OF PRESS) I play the Barbican in London on March 5th for the second show of Imagining Ireland. I’m really excited about that one, it’ll be the biggest show I’ve ever played – aah!

Q- What have some of your most memorable moments so far been?

2017 was incredibly kind to me. Some highlights were definitely supporting JVM & KT Tunstall. Getting to play the Great Escape was awesome too, Brighton is a beautiful city. And ending the year by winning the Other Voices Open Call was a really big boost for me – it made me really excited to write more and work a bit harder.

Q- What have been the best albums that you’ve listened to in 2017 and why?

Couple of my favourites are:

Phoebe Bridgers – Stranger In The Alps: I love this album so much because it’s made me fall in love with electric guitar. Particularly Smoke Signals – it’s just such an incredible track, it’s one of those ones where you’re like..’I wish I wrote that!!’

Billie Marten – The Writing of Blues & Yellows: This album has just been so instrumental in my own writing this year, Billie’s melody writing is beautiful

Big Thief – Capacity: Recommended to me by a friend and I’ve been listening to it non-stop since.

This year for me is just about playing smaller, intimate shows and taking the time to release music that I’m super proud of. As I mentioned earlier, I have an exciting physical release coming in April this year. And in summer, I’ll be heading to Berlin for a bit to start writing an album!

Be sure to keep an eye out for that new single release dropping next month. Dark Places / Small Talk is out on 27th April 2018 via Veta Records.