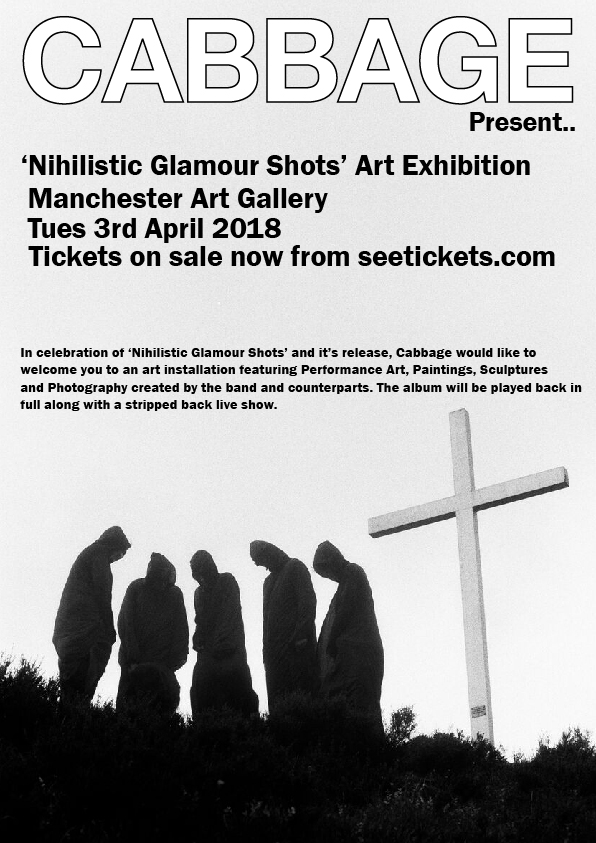 Dear the internet and all those semi conscious. It gives us great pleasure to announce ‘Nihilistic Glamour Shots: Art Exhibition’ on Tuesday 3rd April. We will host an evening at Manchester Art Gallery where we will reveal the autopsy of our debut record and produce pieces ranging from performance art, paintings, sculptures and installations that coincide with each track on the album. The experiment itself will be documented by our dear lens coordinator Kallum Nolan and all members will be taking part in the performance. The evening will also us performing a live stripped back show. There are a limited amount of tickets due to the size of the venue so to all who find a deep interest in scrap books and bathtubs make haste for the tickets. Keep yer eyes peeled for more information. MUA! x

Cabbage will feature in the upcoming Radio 4 documentary ‘The Art of Now: Band Politics’. The ‘Art Of Now’ series sees BBC 6Music’s Chris Hawkins look at bands at the forefront of a new wave of interest in politics, including Nadine Shah, Cabbage and Life, and considers if changes in the music industry could be shaping their political and social outlook. The documentary airs on March 22 at 11.30am on Radio 4.

Containing the BBC 6Music playlisted singles ‘Gibraltar Ape’, ‘Celebration Of A Disease’ and ‘Arms Of Pleonexia’, ‘Nihilistic Glamour Shots’ is released 30th March 2018 on Infectious Music. Produced by James Skelly and Rich Turvey (Blossoms, The Coral, She Drew The Gun) at Parr Street Studios in Liverpool, ‘Nihilistic Glamour Shots’ is an album that confirms Cabbage as one of the most nuanced bands in years. Equally drawn to socialist politics and mucking about, they’re devotees of both big choruses and anarchic totems like GG Allin, Genesis P Orridge and Butthole Surfers.

While it broadens Cabbage’s sound further still from their already eclectic previous five EPs, ‘Nihilistic Glamour Shots’ also does a superb job of capturing the raw energy of their freewheeling live shows. The band have kept the gigs fresh partly by theming each tour, with autumn’s Healing Brexit Towns Experiment living up to its name.

Cabbage recently finished the first leg of their 2018 UK tour, including a sold-out show at London’s 100 Club. They embark on further dates in April following the release of the album, with support from She Drew The Gun. On May 19th, the band will curate ‘Glamour At Thee Ritz’ at Manchester’s O2 Ritz. Starting at 5pm and headlined by Cabbage, the event across 2 rooms at The Ritz will feature PINS, The Blinders, Rhythm Method, Witch Fever, Lady Bird, Sports Team + more to be announced over the coming weeks.

Tickets for all gigs http://gigst.rs/CABBAGE