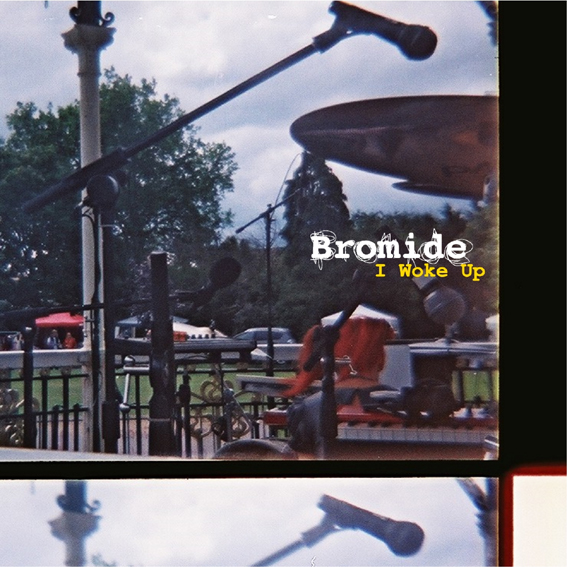 Bromide
announce new album
I Woke Up
out 25th May 2018

In 2015 London-based Bromide got their electric shoes back on with new bass player Hugo Wilkinson joining long-term collaborators, singer-guitarist Simon Berridge and drummer Ed Lush. The resulting album I Remember was described by Vive Le Rock as mixing “the best bits of The Lemonheads and Dinosaur Jr replete with melancholic melodies and J Mascis-ish guitar lines” and won new fans including Gideon Coe on BBC6  who dubbed their single ‘Mr. Ciccone’s Daughter’ “Fantastic!” and  played it for several months at the end of 2016.

Another vital piece of the puzzle had also fallen into place as they’d found producer Brian O’Shaughnessy at Bark Studios who seamlessly welded their pop onto their rock and last year the band returned to Bark to record their sixth album, I Woke Up.

Listen to the first single, “Two Song Slot” which premiered on Back Seat Mafia today who describe it “full of driving 90’s alt/indie rock, cramming in the guitars and attitude of Mudhoney and mixing it with the harmonies and melodies of Teenage Fanclub.”

I Woke Up, is stuffed full of pop delights struggling to reach the three minute mark such as “Two Song Slot”, the story of a disastrous open-mic encounter turning into a last minute victory and “Tale To Tell” a conscience-pricked near perfect example of the Bromide sound written in the studio while recording, the album also sees the band begin to stretch their wings a bit. “Magic Coins” has an unexpected almost drum and bass inspired rhythm track while album closer and title track “I Woke Up” is a six minute Doorsian odyssey. The song began life as a response to the biopic Mr. Turner and in particular the scene in the film where the painter is tied to a mast in order to experience the full force of a nocturnal storm.  Starting with Berridge’s Glenn Branca inspired intro Lush and Wilkinson then latch on a full-on krautrock groove to build the track through to an epic conclusion complete with thunder, rain and anything else lying round the studio.

Elsewhere Patti Smith’s “Dancing Barefoot” is given a thorough work out plus there are contributions from the rhythm section with Lush writing the music for both “I’ll Never Learn” and “Always Now”” while Wilkinson provides a breath of fresh air in proceedings with the instrumental Futurist Shore Leave”.

I Woke Up is released 25th May on Scratchy Records.