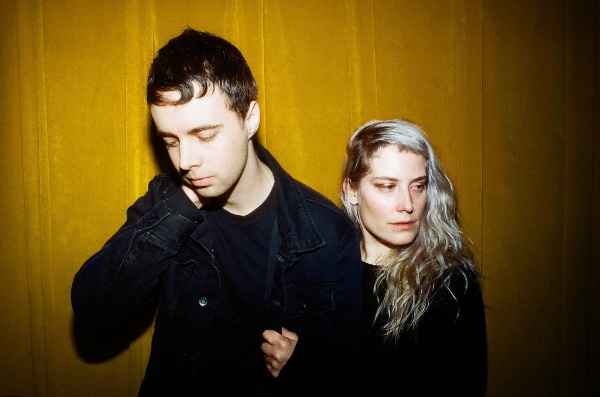 With a new album in the pipeline for later this year, Northampton, Massachusetts duo BOY HARSHER are reissuing their two sold out 12”s via their own new record label, Nude Club. ‘Lesser Man’ and ‘Yr Body Is Nothing’ will be re-released on April 27th, with a new two-track 12” ‘Pain II’ to follow on May 11th.

Since 2014, Boy Harsher have built something of a cult following for their gritty, beat-led darkwave, consistently selling out live dates and racking up nearly 2 million YouTube plays for underground hit “Pain”.

Now, as they prepare to play SXSW followed by an extensive US tour with The Soft Moon, these 12”s will be made available again. They have also shared a remix of “Pain” by The Soft Moon, which will be included on both the new extended edition of ‘Lesser Man’ as well as the ‘Pain II’ vinyl – details of each release & format below.

Boy Harsher is a dark electronic duo that produce gritty dance beats infused with ethereal vocals, creating a sound that is eerie, intense and incredibly danceable. Augustus Muller develops the underbelly of sound with minimal beats and grinding synths, where Jae Matthews whispers, screams and chants on top. Together, the music created is somewhere between industrial, drone and confessional storytelling. Muller and Matthews both have a strong background in film and their cinematic approach translates effectively in both their recordings and live performance.

In 2017, they released the ‘Country Girl EP’ via Ascetic House and played their first ever UK shows, which sold out far in advance.

‘Lesser Man (Extended Version)’ is the first release of Boy Harsher`s imprint, Nude Club Records, originally released on cassette by Soft Science in (2014), and Night People (2015). The LP was reissued by the infamous Berlin goth label “aufnahme + wiedergabe” in Nov 2017 on 500 copies, and sold out in less than two weeks. Remastered by Thomas P. Heckmann at Trope Mastering, ‘Lesser Man (Extended Version)’ includes the dark wave hit, “Pain” and the unreleased track “Run” which was recorded during the ‘Lesser Man’ session. LP version includes digital download code + 2 bonus tracks: “Pain (radio edit)” and “Pain (The Soft Moon Remix)” and will be released for the first time ever on CD format.

BOY HARSHER ‘Yr Body Is Nothing’ LP/CD/CASSETTE/DIGITAL (NUDE002)
Out April 27th – Pre-order here.
‘Yr Body Is Nothing’ was originally released on vinyl by DKA records, pressed three times. All pressings sold out in a matter of weeks. With a heavy emphasis on rhythm and atmosphere, the 10-songs presented here showcase a songwriting and production style that is sophisticated and unique, dark but powerfully uplifting. The sound is paradoxically massive yet minimal, providing the perfect space for Jae Matthews’ rich, deep, and emotive vocals to occupy as she, along with co-pilot Gus Muller, pulls the listener ever deeper with each passing song. Also, available on CD for the first time ever!

Tracklist:
A: Pain (edit)
B: Pain (The Soft Moon remix)