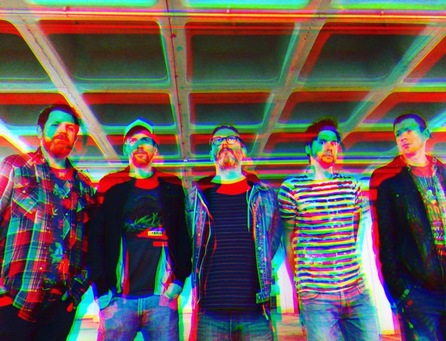 AIR FORMATION
Album ‘Near Miss’ out now
Watch brand new video ‘A.M.’ HERE
“A pulverizing snapshot of their mastery of noise and effects, the band’s sound has gotten better and matured since the split, but let’s hope they stick around this time.”Consequence of Sound
“Guitars shimmer amidst succulent melodies while the rhythm section tightly holds the backline forthwith. It’s a welcome return, and one that will hopefully bare more fruits over the coming months.” Drowned in Sound
After 2015’s triumphant return with the ‘Were We Ever Here’ EP, Brighton shoegaze luminaries Air Formation, have released their fourth long-player ‘Near Miss’, via the UK’s premiere psych label, Club AC30. They’ve now also shared their brooding new video for their latest single ‘A.M.’.
Speaking about the video for the band say: “After the head trip video Chris at Innerstrings did for us on Vanishing Act, we wanted to try something a little more cinematic. I added the track to some motorcycle footage I had and it felt like really clicked with the Krautrock vibe. It was a lot of fun experimenting”
‘Were We Ever Here’ marked Air Formation’s return following their split in 2010 and was comprised mostly around the songs written prior. ‘Near Miss’ is the first album of entirely new material the band have written and released in seven years.
The album was recorded and mixed by Pat Collier (The House of Love, Primal Scream, Jesus and Mary Chain) in just two days. The band set about expanding on earlier sounds by creating an album that is rawer than previous efforts and explores the likes of post-rock (Clouds of Orion), free-form improvised space-rock (Formation 4) and three minute sonic assaults (Vanishing Act), together with the uplifting melancholia Air Formation are known for.
“Sometimes you wish you could just disappear…” guitarist and frontman Matt Bartram tells us, “be free of any responsibility, show your true emotions without consequence, go back to the way you were in those rose tinted days gone by… ‘Vanishing Act’ is that voice inside your head telling you can do that. The increased tempo of the middle section reflects the rush of euphoria before reality hits and it all comes crashing down again.”
Air Formation formed in 2000, long before spiritual forbearers Slowdive and Loop were considered acceptable influences. Since signing to Club AC30, a long time bastion of the modern shoegaze sound, the band have gained a devoted following and received critical acclaim, with Drowned In Sound describing the band as “one of the nation’s most consistent outfits” and their incendiary live shows have seen them share stages with the likes of Vessels and Efterklang.
Air Formation are: Matt Bartram (Guitars & Vocals), Ben Pierce (Bass), James Harrison (Drums), Ian Sheridan (Guitar) and Richard Parks (Keyboards).
Track list: Near Miss / Vanishing Act / God Let Me Down / Formation 4 / A.M / Night Chimes / Clouds Of Orion / Hearing Echoes
Facebook