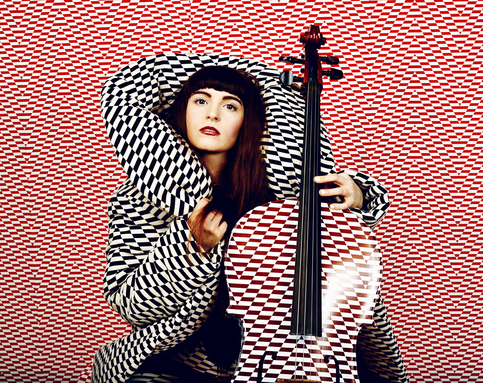 “Stark glitchy electronics juxtaposed with warming acoustic cello and violin, and semi pop vocals.” – God Is In The TV

New single ‘Reasonable Doubt’ is about exploring the insular side of human nature in relation to the ecological and political environment. Abi says “I imagine a twisted & broken playground scene with a self-involved cheerleader lording over her clique in the setting of an apocalyptic world. They just carry on regardless to the destruction around them, all except for a shunned onlooker looking at them in disbelief”

The song was built around the beginning cello riff and developed with the addition of field recordings taken from a children’s playground, sequenced drums, analogue synths, driving piano chords and warped backing vocals.

Abi wrote most of the tracks on her new album on cello initially in various locations of her old hometown of Brighton, from the living room of her seafront apartment to the dark belly of Sticky Mike’s Frog Bar. From this starting point, Abi set out on a sonic exploration, getting field recordings in locations as diverse as a printworks, a tap dancing club and following a chance meeting there, a fishing boat:

“After the tap dancing class I was explaining to the man who ran it how I was trying to get onto a boat to record some sounds and by pure coincidence it turned out he was a fisherman, I did not expect a tap dancing fisherman! It was truly an amazing experience to go out first thing on to the water and share a moment of time with such an interesting character.”

Following a move to Camden the tracks were fleshed out with orchestral arrangements and were recorded in Jay Malhotra and Sam Duckworth’s Amazing Grace studio in Hoxton. These sessions included brass, wind and choral ensembles. Abi then worked with ‘the patron saints of print’ Eley Kishimoto to create the visuals for the album matching the story of each print and pattern to the story of each song. Their patterns are featured on both the album and single artwork and has been a source of inspiration throughout the making of the album.

While developing as an artist, she has toured the UK & Europe with Patrick Wolf, sold out her debut EP and released music on the label set up by Daniel Copeman of Esben & The Witch and has played shows with the likes of CocoRosie, Polica, Michael Kiwanuka, Other Lives, Deptford Goth and festivals such as End of The Road, The Great Escape and Wilderness.

The album ‘Beautifully Astray’ is available to pre-order and includes exclusive interactive artwork available to those pre-ordering the album. Abi says “The idea is inspired by the dadaist approach using surrealist techniques to inspire”. RSVP a creation of your own using elements from the artwork itself to inspire a new song by Abi Wade responding to and incorporating the words that are received.

Grawl!x shares “Appendix B” (featuring Haiku Salut and Richard J Birkin) from new album Appendix due out on Reckless Yes on 6 April