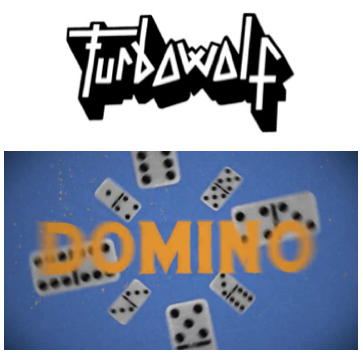 “Just check it out… What a fabulous piece of work. …[an] expansive, mind-blowing… frequently astonishing third album.” – Planet Rock

MAIN SUPPORT FOR ROYAL BLOOD
ON THEIR U.S. TOUR THIS SUMMER

Bristol alt-rock mavericks Turbowolf have revealed the lyric video for ‘Domino’, the latest single taken from their upcoming album The Free Life, which will be released via So Recordings on March 9th.

Featuring their surreal album artwork transformed into a mesmerising collage of lysergic imagery, the video spirals through the track, firing visuals straight into your retinas!

‘Domino’ is the second single to be taken from the upcoming album, The Free Life, and in addition to playlist support from Kerrang! Radio, regular spins from the likes of Huw Stephens, Dan P Carter and Clare Amfo at Radio 1 and John Kennedy at Radio X, they’ve recently won a new fan in the shape of Sir Elton John who blasted them out on his Beats 1 show, declaring them to be quite simply “Fabulous!”

‘Domino’ itself is a transportative, transcendental voyage into the anarchic punk ethos of Turbowolf. A breakneck sonic journey of driving bass lines, immersive overdrive and cutting synthesisers, the track races through pounding verses before exploding into its anthemic chorus.

The new album is a vibrant masterpiece for this fractured era as Turbowolf push back the boundaries of music with ambition in their heads and disruption in their hearts.

Tickets for all shows are available at http://www.turbowolf.co.uk/live