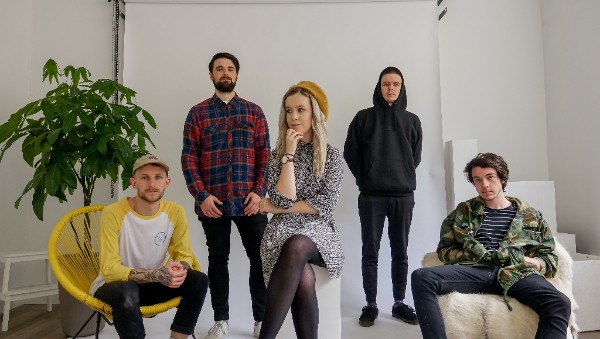 Irish indie-punk quartet, The Winter Passing, have shared their brand new video for Like Flowers Ache for Spring via Big Scary Monsters in the UK/Europe and 6131 Records in North America.

Talking about the video, siblings Rob and Kate Flynn commented:
Rob: “Like Flowers Ache For Spring is a reflection of torment from the struggles of real life essentially. Throughout ‘Double Exposure’ we documented mental health issues. Its mainly focused towards people of authority in every day life such as bosses in work places and those who think they’re better than you. It documents a bundle of emotion and the expression of wanting to be alone from human contact. We wanted the visuals to be an as cathartic experience as the song itself.”Kate: “This song, for me, both recognises the faults of being an introvert but also celebrates it, musically. It talks about how sometimes we feel stuck in time while the world is moving quite rapidly and how daunting it is when you feel like you’re not doing very much. For the music video for ‘Like Flowers Ache For Spring’, we wanted to capture & depict that in its truest form.”

The Winter Passing‘s strength has always been in their ability to truly collaborate, using each members’ wide range of inspirations and perspectives to create something highly unique. Double Exposure, their most recent EP, finds the band achieving a new level of cooperation, combining punk grit, indie quirks, and ’90s alternative swagger, along with the interwoven lyrical narratives of sibling vocalists Rob and Kate Flynn, for a dynamic yet cohesive listen.

The Winter Passing have always fearlessly followed their own path, an approach fueled by their distinctly collaborative nature. Every member brings a unique set of skills, influences, and perspectives that coalesce into a sound that is difficult to categorize but easy to love. On their fittingly titled new EP, Double Exposure, the Irish quartet take this approach to a new level, expertly layering their many inspirations for the sake of one goal: to create music that moves listeners