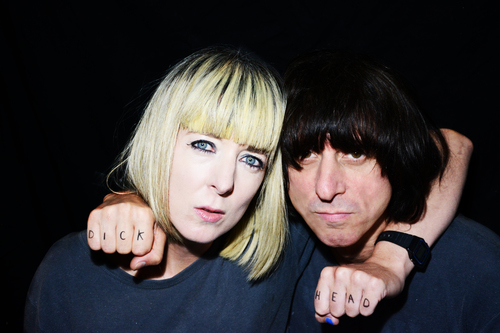 The Lovely Eggs
Announce their biggest headline show to date
At The Scala in London on Sunday 28 October
Ticket link here
Listen to new single “Wiggy Giggy” out 16 February
https://soundcloud.com/thelovelyeggs/wiggy-giggy-1
Album This Is Eggland due out 23 February
UK tour with support from Phill Jupitus (Porky The Poet) and Mr. Ben and The Bens starts 8 February
London, Manchester, Lancaster and Newcastle shows are all SOLD OUT
Tour Dates:
Thurs 8 Feb – The Yorkshire House, Lancaster (Sold Out)
Fri 9 Feb – The Brudenell Social Club, Leeds
Sat 10 Feb – The Cluny, Newcastle (Sold Out)
Sun 11 Feb – The Mash House, Edinburgh
Mon 12 Feb – Stereo, Glasgow
Tue 13 Feb – The Adelphi, Hull
Wed 14 Feb – Clwb Ifor Bach, Cardiff
Thur 15 Feb – The Cellar, Oxford
Fri 16 Feb – The 100 Club, London (Sold Out)
Sat 17 Feb – Band on the Wall, Manchester (Sold Out)
“Exhilarating and trashy” Uncut
“it’s a hard and invigorating celebration of being an outsider.” Prog
“Impressively focused, relentlessly brilliant and a must-go destination.” Shindig 5*s
“This should be administered on the NHS as an antidote to these fucked-up times.” Buzz Magazine
“Not since Space Ritual-era Hawkwind has anyone so successfully combined workboot riffing with the swirling bleeps of the unexplored cosmos.” Record Collector
In the wake of their sold-out gig at London’s 100 Club on 16 February (which sold out four weeks in advance), Northern psych-punk duo The Lovely Eggs have announced the biggest show of their lives at The Scala in London on 28 October 2018 – watch gig trailer video here and buy tickets here. They’ll be heading out on a UK tour on 8 February where shows in Manchester, Newcastle and their hometown of Lancaster have also sold out, and the rest of the dates are heading that way rapidly – they will be supported by Porky the Poet (AKA Phill Jupitus) and Mr Ben and The Bens on all dates. The Lovely Eggs have been selling out venues across the country without the help of management, booking agent or record label support. With a fierce D.I.Y ethos they have earned a reputation for their ferocious and joyous live shows and for married couple Holly Ross and David Blackwell, being in a band is a way of life.
The Lovely Eggs are one of the most unique, innovative and genuine bands on the British Underground music scene. They return with a mind-melting new album: This Is Eggland, which is released on 23 February via Egg Records. Heavier and more in-your-face than anything they’ve done previously, Holly and David bringing together a surreal sense of humour and kitchen-sink realism. Working with a producer for the very first time, Dave Fridmann(Mercury Rev, The Flaming Lips) lends his magic dust to bring out the best of The Lovely Eggs’ explosive blend of motoric krautrock, 60s psychedelia and punk rock attitude, all flipped over and egged up. They create their own world and invite us to join them in Eggland. Be prepared for a joyous riot of a ride.
They recently shared the new single, “Wiggy Giggy” – listen via Soundcloud – which takes us on a cosmic odyssey where “normal” life and always “striving for more” meet something more magical! Where the grass is not always greener whatever side you look from.  The single is already receiving a tremendous response from radio and has been added to the BBC 6 Music playlist. Steve Lamacq stated, “I can’t get enough of this record at the moment,”and made it the “Lamacq livener” (where it has been played every day for a week). It went on to win Roundtable and was the most popular track on both Steve Lamacq and Marc Riley’s show on consecutive weeks. The pair will play their seventh live session for Marc Riley on Tuesday 6 February.
Listen to “Wiggy Giggy” here:
https://soundcloud.com/thelovelyeggs/wiggy-giggy-1
Watch video for “I Shouldn’t Have Said That”
Directed by Casey Raymond
https://youtu.be/-HXmAleNWBU
Pre-order This Is Eggland
http://smarturl.it/ThisIsEgglandAppleMu
http://smarturl.it/ThisisEgglandSpotify
Tickets for Scala show
https://www.seetickets.com/event/the-lovely-eggs/scala/1198447
www.thelovelyeggs.co.uk
www.twitter.com/thelovelyeggs