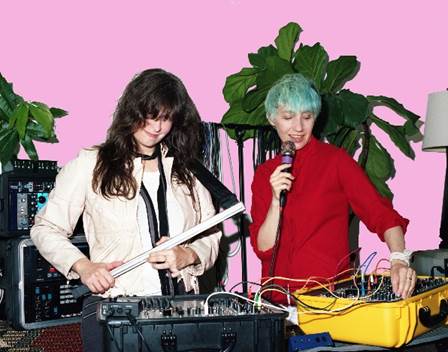 “Small and efficient hook-machines [that] find sharp and literary ways to dig into deep cracks…Enormously engaging’ – ”Stereogum, album of the week

“Both intelligent and sentimental” – New York Times, songs of the year

The Blow’s new album, Brand New Abyss, is a lightning rod. A wild assembly of frequencies produced out of a thrust of electroacoustic punk energy, the album is a search for a new sound of rebellion in an environment where the aesthetic of punk has been commodified into submission along with almost everything else. Brand New Abyss was written and produced by The Blow (Khaela Maricich and Melissa Dyne) using a production rig the duo painstakingly developed over the past four years; a mothership of patched-together modular synthesizers, ancient samplers and audio production gear.

The record crosses many grounds. Flipping the conventional album notion of rallying out of the gates, its opening pieces are measured, delicate, confessional. “Dark Cold Magic” is lit up by breathtakingly pretty shooting stars of analogue synth melodies;  “So There” laments on a bubbling bassline that underpins Khaela Maricich’s gentle wordplay and wistfulness. The contrast comes at the midpoint of the album, with the fizzing, irreverent “The Woman You Want Her To Be”, and the beautiful, sparkling, quasi-hip-hop of “Get Up.”

As well as this newfound structure-toying, Brand New Abyss represents further new starts for The Blow: it is their first with their newfound passion for analogue synth programming, Maricich and Dyne teaching themselves to control the raw material of sound through modular synthesis, going beyond the processing of live instrumentation methodology of their previous outings.

Produced in a multitude of spaces along the US Eastern coast (the band were forced to relocate as their NYC studio space became unexpectedly surrounded with construction work), Brand New Abyss is released in the UK and Europe in March 2018 on turquoise vinyl and all digital formats.