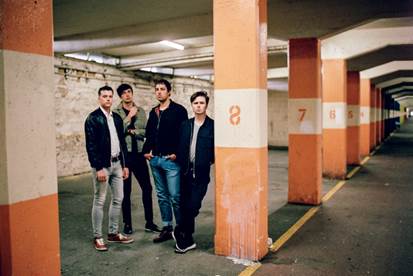 Out Now- February 2nd via Straight Lines Are Fine

Listen to ‘Voyeur’ and ‘Burn In The City’

“With this latest release, Slow Riot join the ranks of Eagulls and Savages at the forefront of a new breed of bands fusing danceable beats with dark-pop sentiments.” – The Line Of Best Fit

Ireland’s Slow Riot are releasing their new double A-side single, ‘Voyeur/Burn in the City’, via Straight Lines Are Fine on February 2nd. The tracks are the first new material from the band since last year’s ‘Pink December’. Much has happened in the interim; the band expanding to a four-piece after the addition of second guitarist Liam O’Connor (formerly of Fonda), an intense period of songwriting, honing their live craft via numerous festival appearances (notably Electric Picnic, Other Voices), and the recording of a debut album which will be released later in 2018. ‘Voyeur and Burn in the City’ showcase their new approach and provide a tantalizing glimpse of what is to come with their debut full length release.

‘Voyeur’ and ‘Burn In The City’ demonstrate the breadth and depth of the band’s new found songwriting arsenal. The former a visceral alternative rock track, fusing dense yet well balanced production with catchy melodies and driving rhythms; it’s an unstoppable force.

“Liam came to us with the chord progressions and guitar melody of ‘Voyeur’. I liked the contrast between the spectral, somewhat eerie verse parts and the melodic, hopeful chorus”, says vocalist/bassist Niall Clancy. “Lyrically I wanted to convey this disparity between hope and desperation and found a similarity in, what can be, the voyeuristic nature of romance today.”

‘Burn In The City’ employs dreamy guitars, sweeping synths and a reverberant, spacious mix. The track is hard hitting yet sentimental, animated yet brooding, recalling acts such as Eagulls, Preoccupations and Merchandise in its new-wave dance beats with dark, soaring undertones.

Fresh out of the studio, the ‘Voyeur/Burn in the City’ single was recorded with longtime collaborator Kevin Vanbergen (The Pixies, The Maccabees, Dinosaur Pile-Up, The La’s and Biffy Clyro) at Savage Sound Studios, Hastings at the beginning of 2018. Vanbergen has been a catalyst for the band’s creativity since hooking up with them for the recording of their debut Cathedral EP.  Their working relationship continues to thrive, with production of the new material pushing the band into richer sonic territory.

The band have collaborated with up and coming Irish artist Darragh Dempsey for the artwork and videos for ‘Voyeur/Burn In The City’. Recognised by the art world as a rising talent, Dempsey’s ‘Flesh’ painting was inspired by Francis Bacon’s ‘Study after Velazquez’s Portrait of Pope Innocent X’; the anguish and surrealism of the image echoing the themes of the band’s new music.

Slow Riot emerge from their hometown of Limerick backed with support from the likes of The Irish Times, Nialler9, Other Voices, Electric Picnic, Today FM and Whelan’s One’s to Watch; their plaudits building at an impressive rate. They’re flying the flag for a new breed of Irish acts ready for the global stage.

They have also amassed a rich profile of support this side of the Irish Sea, with the likes of Drowned In Sound, Q Magazine, The Line Of Best Fit, Clash and Gigwise amongst many others citing them for big things. Previous single ‘Trophy Wife’ earned the band plaudits from Shaun Keaveny on the 6Music Breakfast Show, Radio X, Absolute and was a mainstay on the band’s native Today FM with DJ Paul McLoone declaring Slow Riot to be “my new favourite Irish band”.

Slow Riot return to the UK in April to headline Communion’s club night in London plus regional dates, but not before they play their first headline Dublin show at Whelan’s on March 22nd. Summer festival dates will be announced very soon.

For music, news and details –